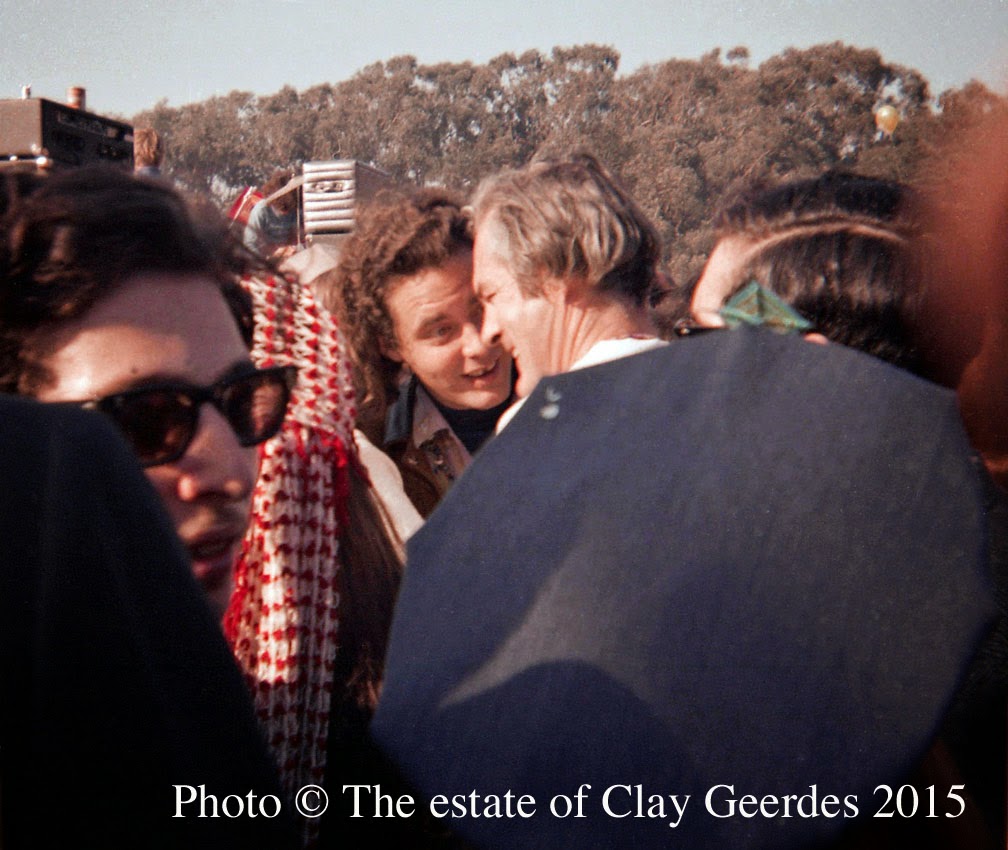 On January 14, 1967, the first Human Be-In was held at Golden Gate Park in San Francisco. It was billed on posters as "A Gathering of the Tribes," and is now regarded as one of the milestones in the history of the 1960s. Many leaders of the new counterculture appeared on the main stage: Timothy Leary, Richard Alpert (soon to become Ram Dass), Owsley Stanley, Allen Ginsberg, Lawrence Ferlinghetti, Gary Snyder, Michael McClure, and Dick Gregory all were there, along with Jefferson Airplane, The Grateful Dead, and Quicksilver Messenger Service. A huge crowd (between 20,000 and 30,000 people, mostly young) danced and grooved (and in many cases, tripped) all day, making it undeniably clear that something different was starting to happen, something that was entirely outside the mainstream.

Clay Geerdes was there, too, with his camera, and featured here are some of his photographs from that day, along with his observations, written in 1997. 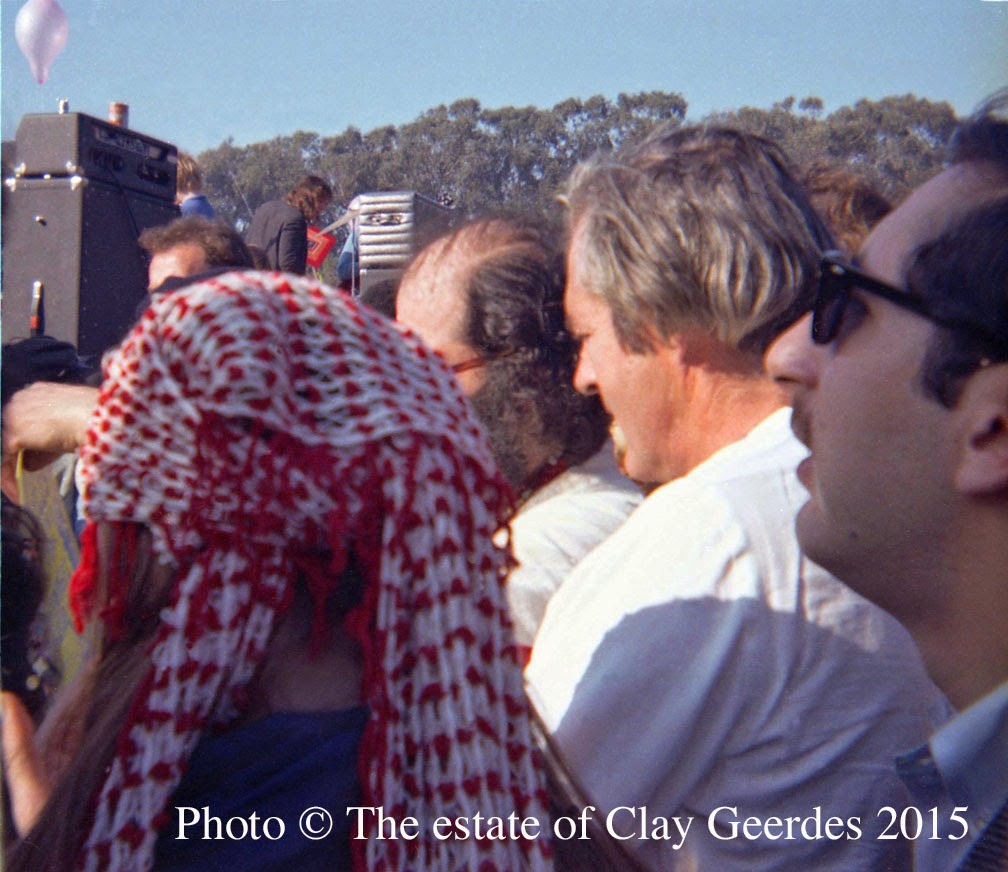 Clay Geerdes: Today is the 30th anniversary of the great gathering of all tribes for a Human Be-In at the Polo Fields in San Francisco's Golden Gate Park. I was teaching English at Fresno State College that year, 33 years old, married six years to my second wife, Shirley, living in a basement flat at 903 Ashbury Street, a couple of blocks from an intersection that had recently become known all over the world. A lot of people were dying in Vietnam that Saturday morning when we left the apartment and walked down the hill to Haight Street, but there were no helicopters above the trees that framed what was known locally as the Panhandle of the park. 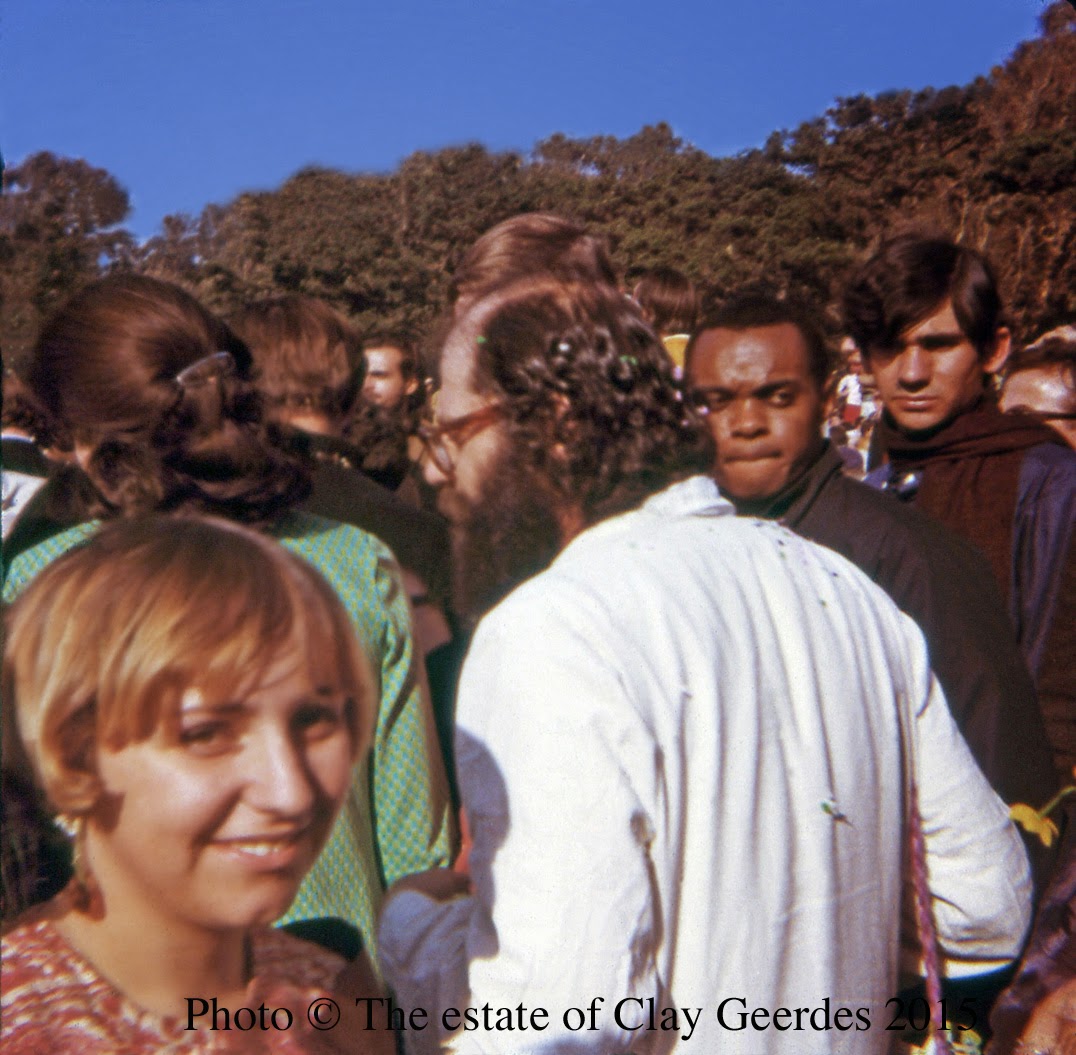 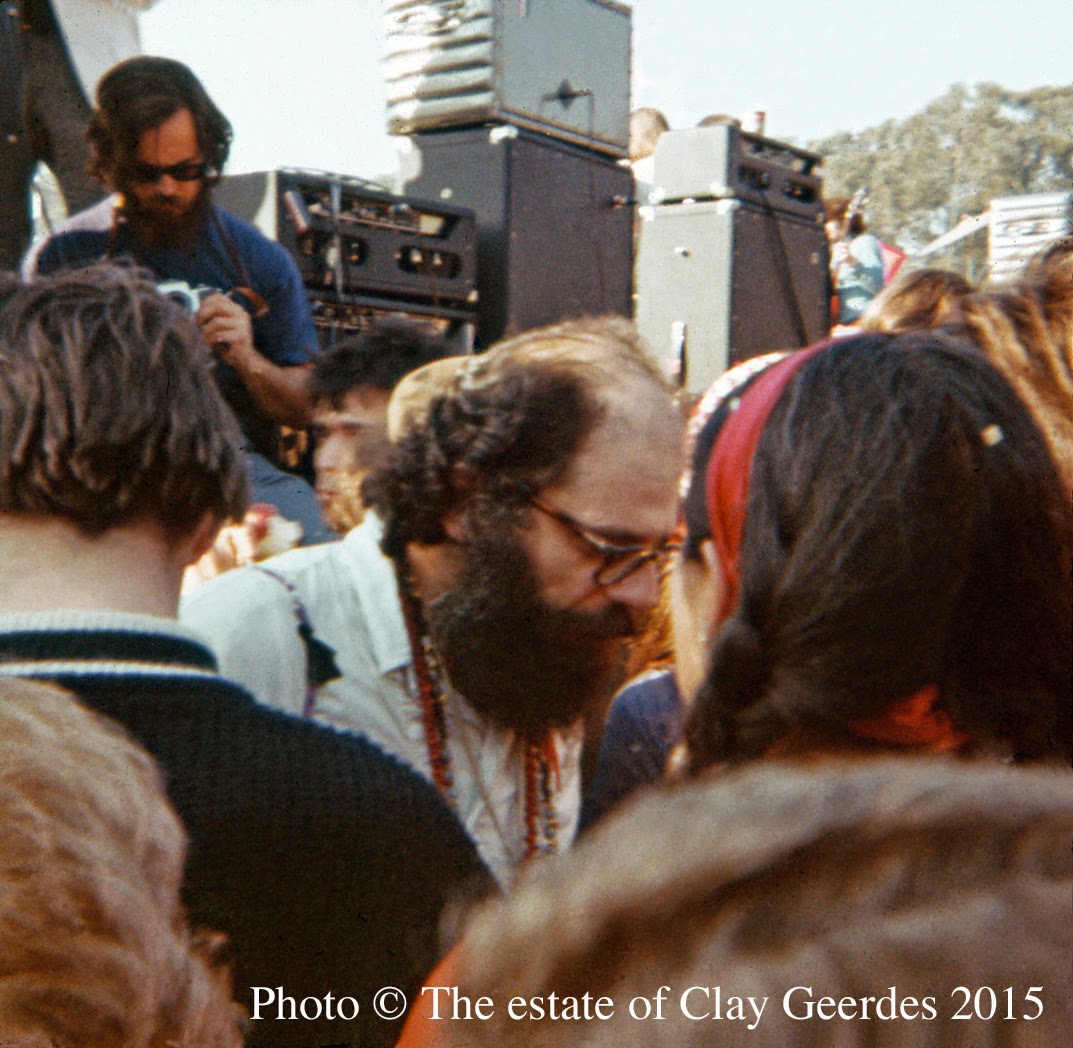 It was a bright, warm, sunny day, and people were all heading in the same direction. We turned the corner, glanced into the Psychedelic Shop, and fell in step with the crowd of costumed people on their way to what was anticipated as the greatest happening yet. The Be-In was announced in the Berkeley Barb and other underground papers, notably the San Francisco Oracle, and there were flyers and posters in the windows of numerous magazine and head shops, listing the celebrities and performers who would be present to entertain the community. 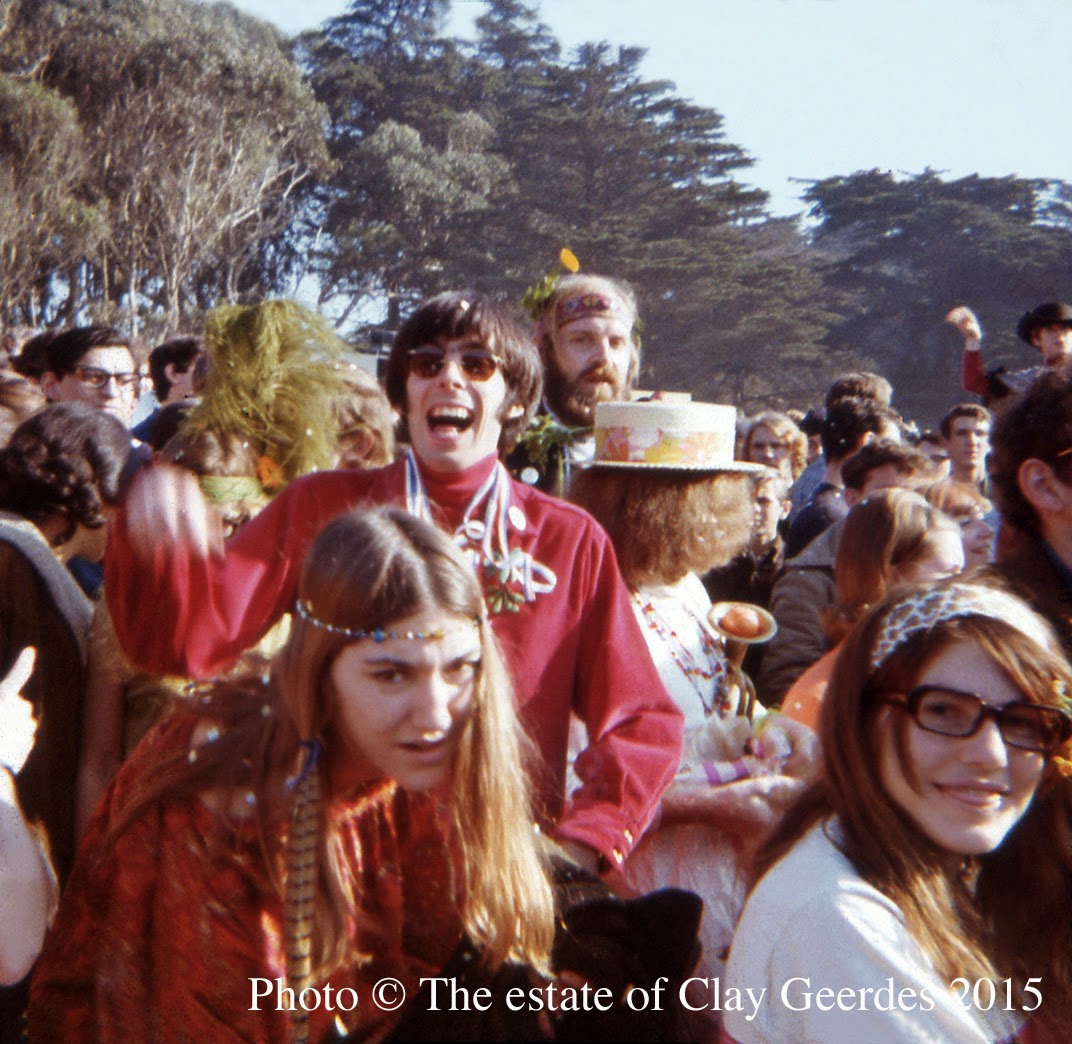 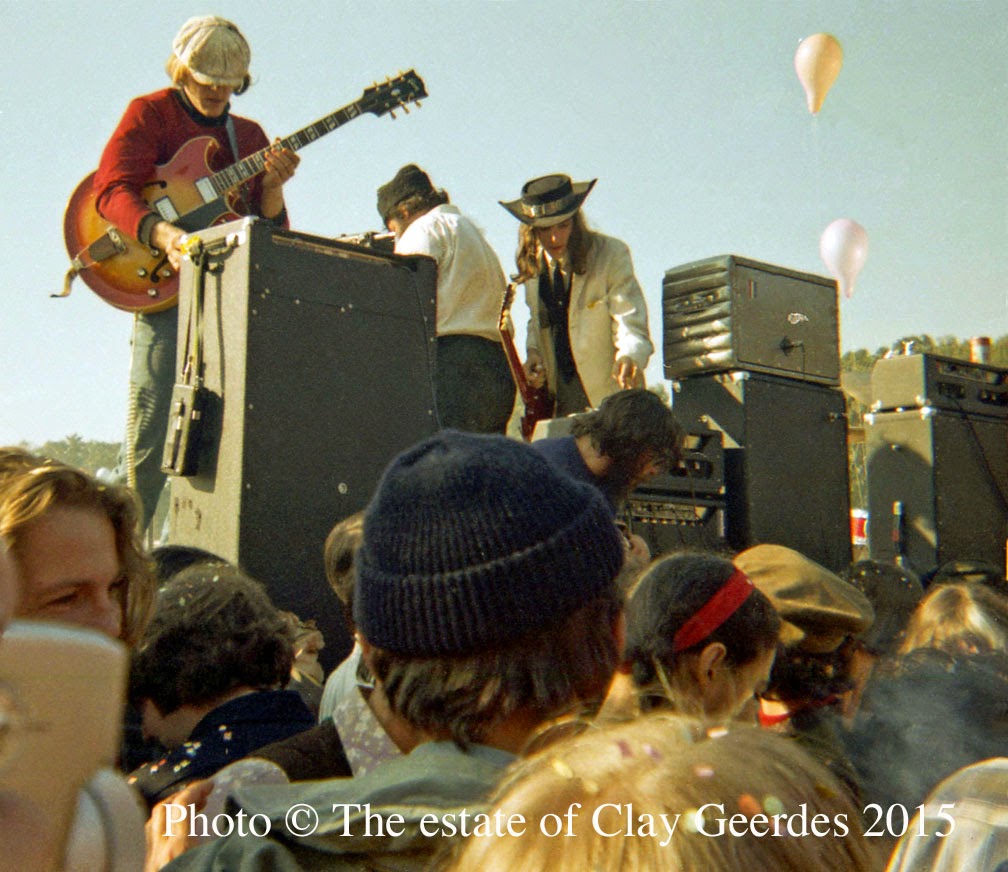 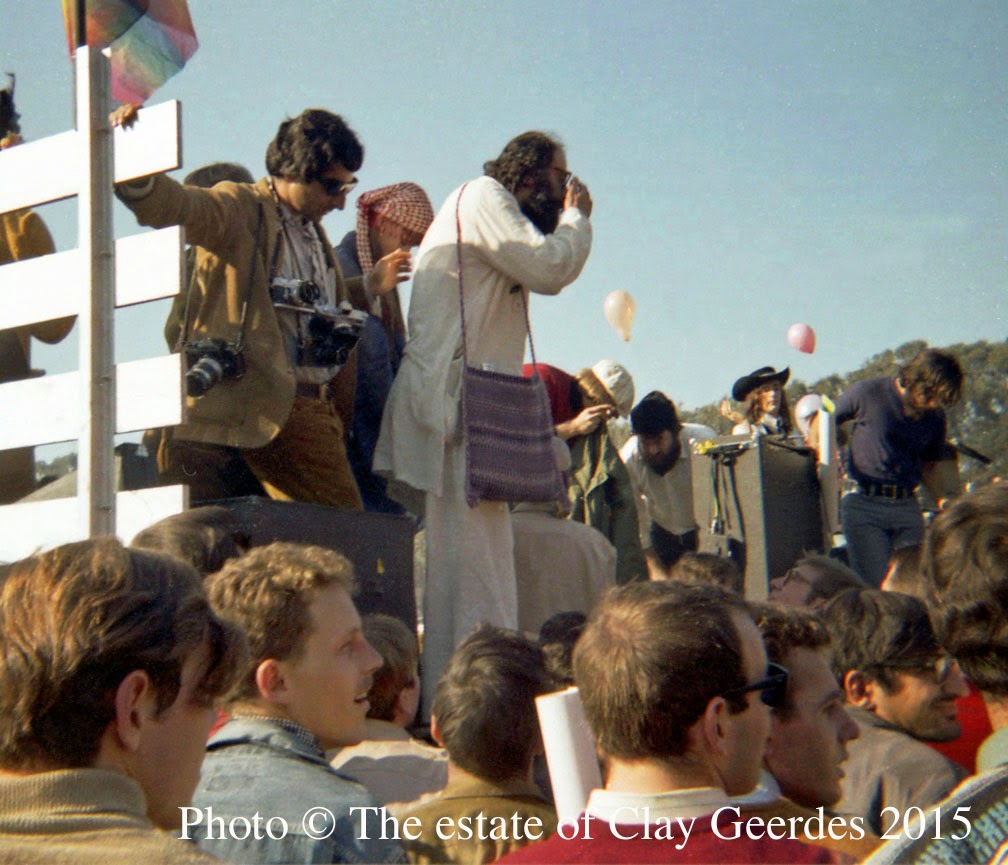 Tim Leary would be there. Leary had been going around the country, lecturing on the wonders of LSD, telling his audiences to turn on, tune in, and drop out. Problem was, the majority who followed Dr. Leary's prescription for expanding consciousness were teenage runaways who had never dropped in, kids who had no work experience. For them, the appeal of psychedelic drugs was purely hedonistic. While an educated psychologist and Harvard teacher like Tim Leary might use psychedelic drugs to explore the parameters of his own consciousness and enhance his writing ability, the average teenager dropped acid to get high. He blew his mind, that barely formed repository of parental and societal rules of behavior, and once acid had helped rid him/her of Establishment restraints, he/she was ready for colorful trips into inner space, not to mention technicolor orgasms and an instant understanding of the lyrics of Bob Dylan's "Subterranean Homesick Blues" and "Positively 4th Street." 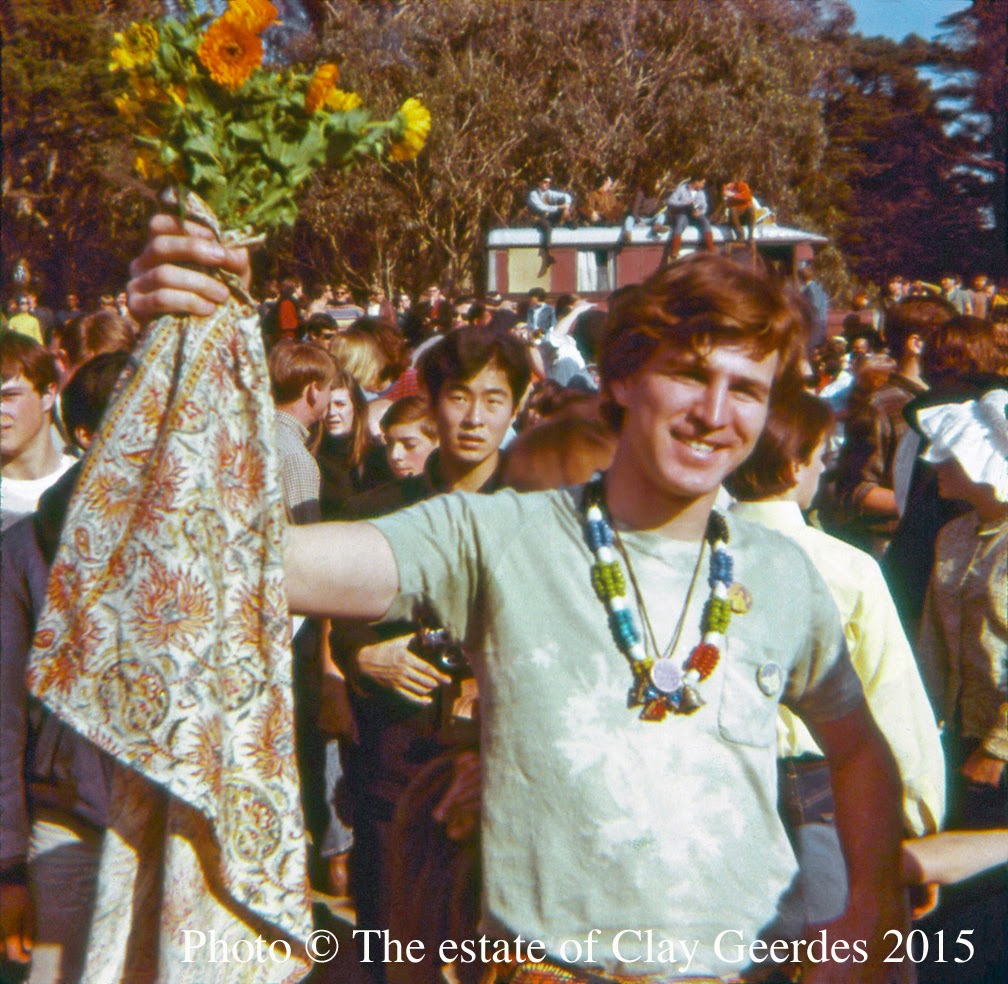 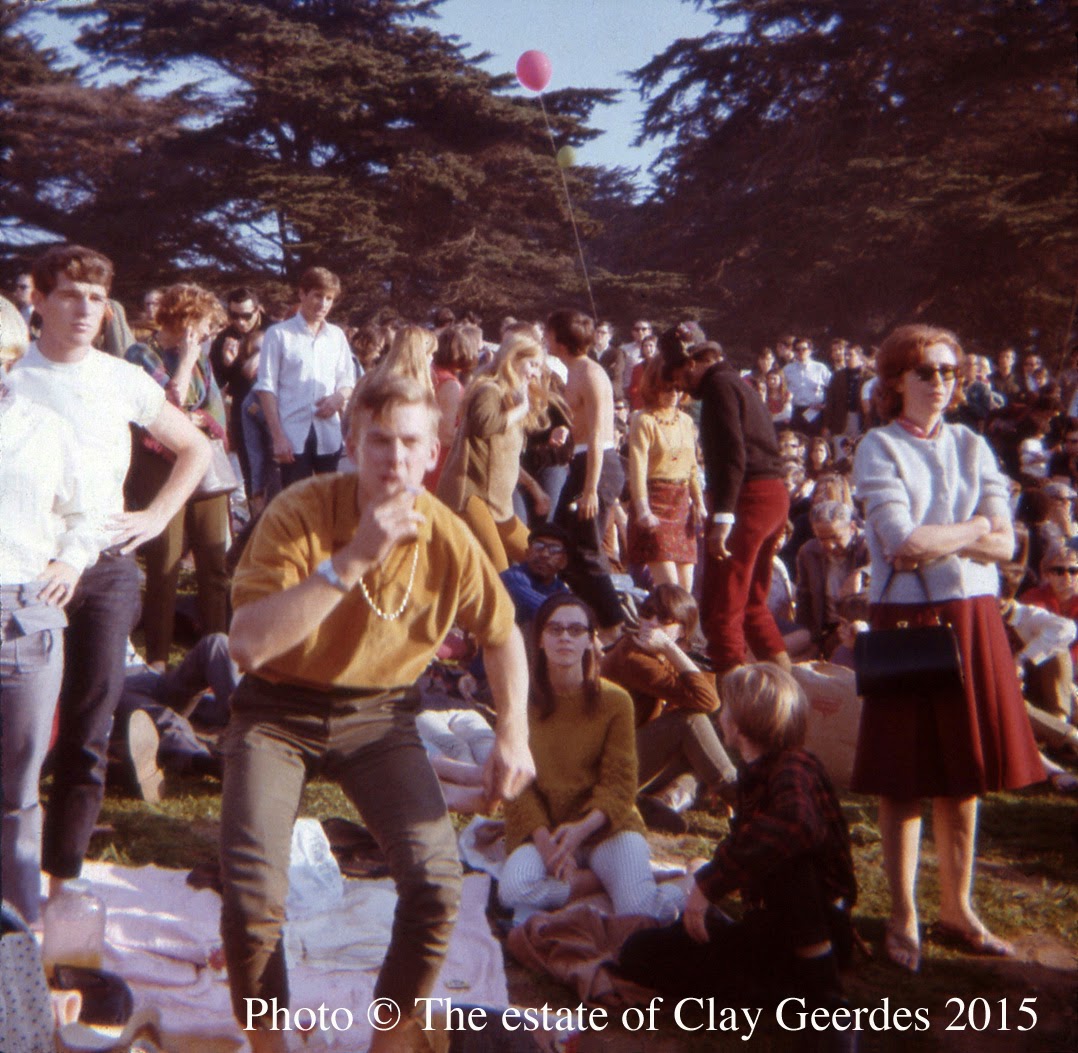 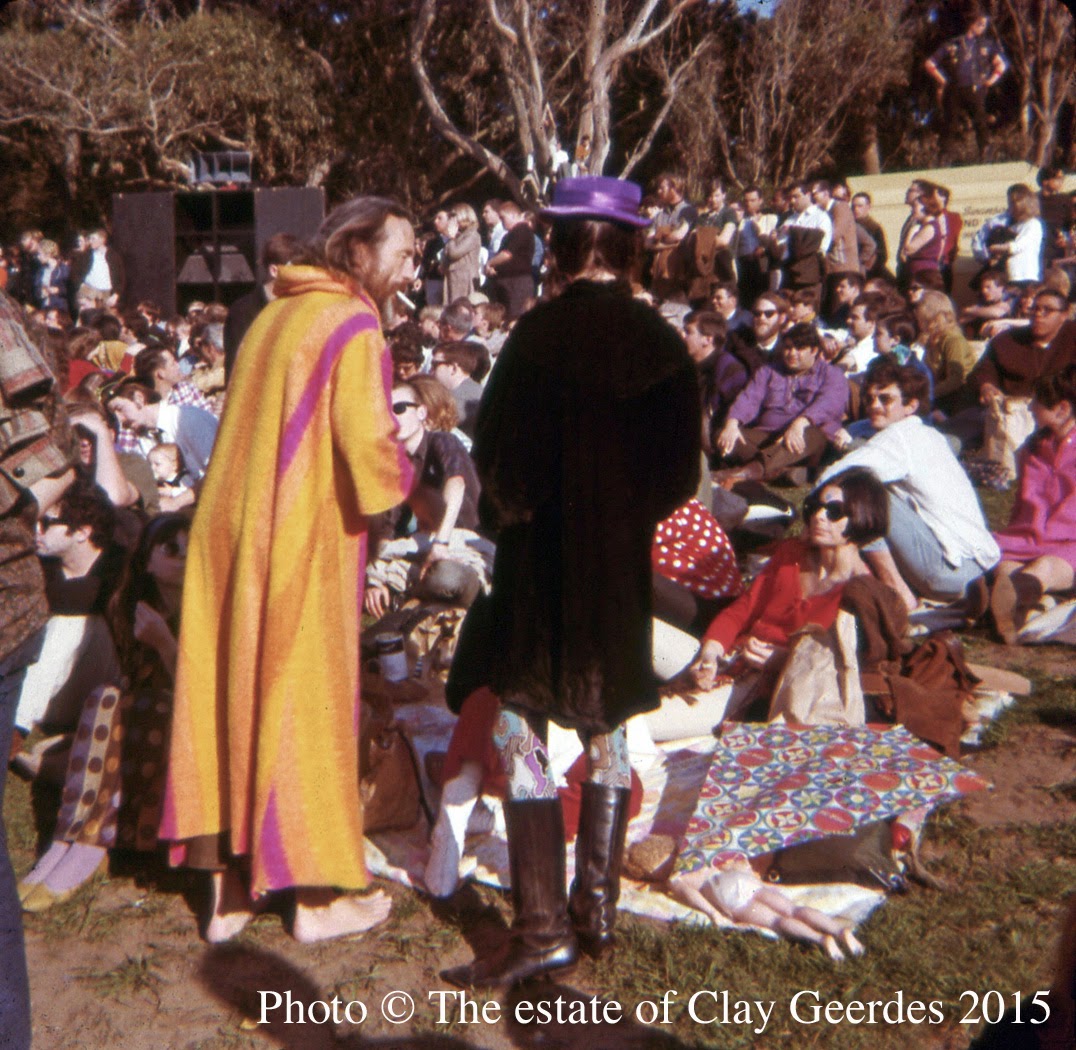 The Human Be-In of 1967 was an important event in my life. For the first time I realized how many people were involved in what everyone felt was a movement toward a new lifestyle, toward re-tribalism. When we reached the Polo Fields (where rugby is played now), there were people covering almost every inch of space. I had never seen so many people in one place in my life. We made our way toward the stage, stepping over blankets and people tanning themselves. 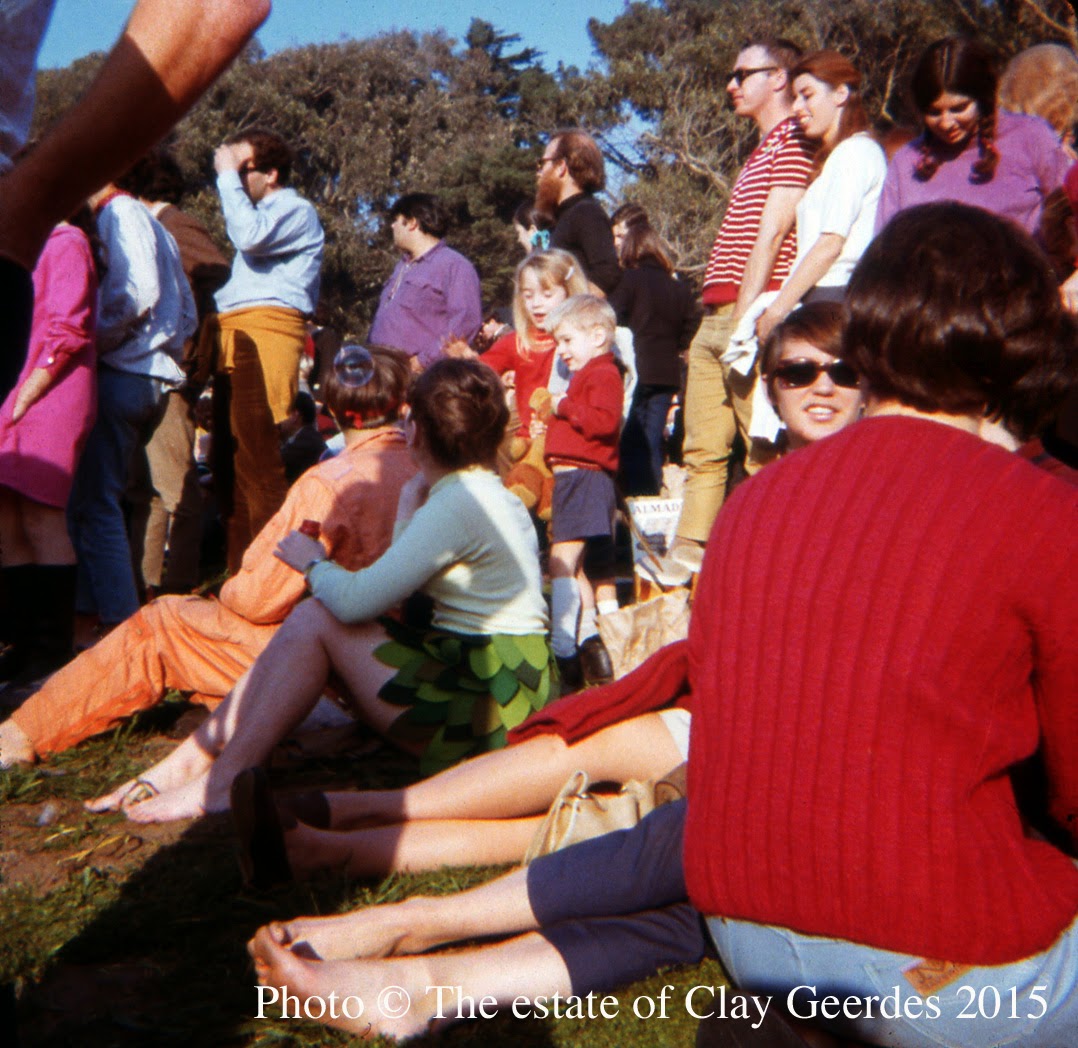 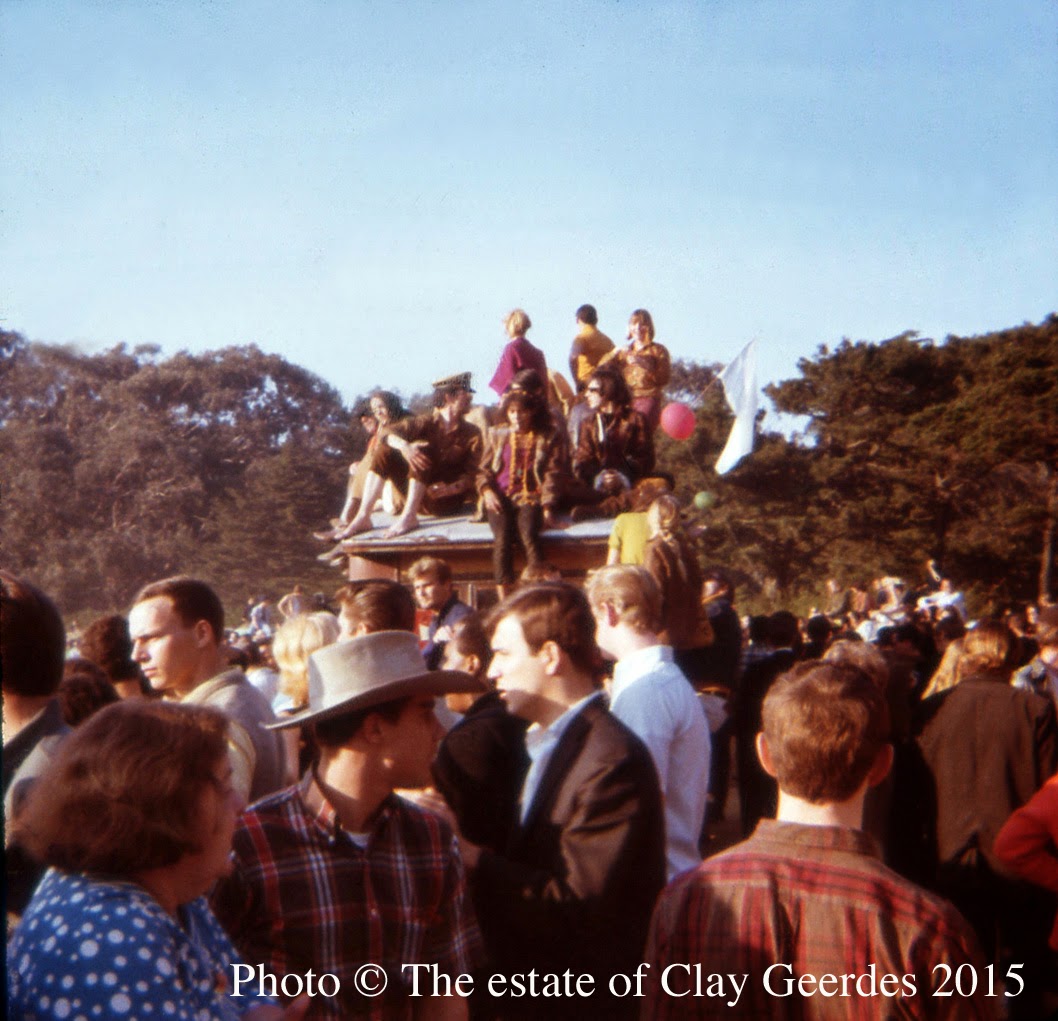 Tim Leary was talking to some people behind the stage. Allen Ginsberg was nearby. Both wore East Indian clothing. Jerry Rubin wore the uniform of a soldier of the Revolutionary War. Lenore Kandel was there. Her pamphlet, The Love Book, had been called obscene and she had been through a trial over it. I saw her onstage with Ginsberg and Leary later in the day. I saw Ken Kesey's bus in the distance, some Harleys guarded by Hells Angels, a lot of varied costumes, members of Sopwith Camel waiting to take the stage. Marty Balin and Jerry Garcia were sitting against the tires of a vehicle, passing a joint back and forth. Paul Kantner was nearby tuning his guitar. Jorma Kaukonen was there, but I didn't see Grace Slick. Many of the members of the Airplane lived on Ashbury Street and we often saw them during the day. I was headed down to Haight the day Jack Cassidy drove up in his new red Mustang. 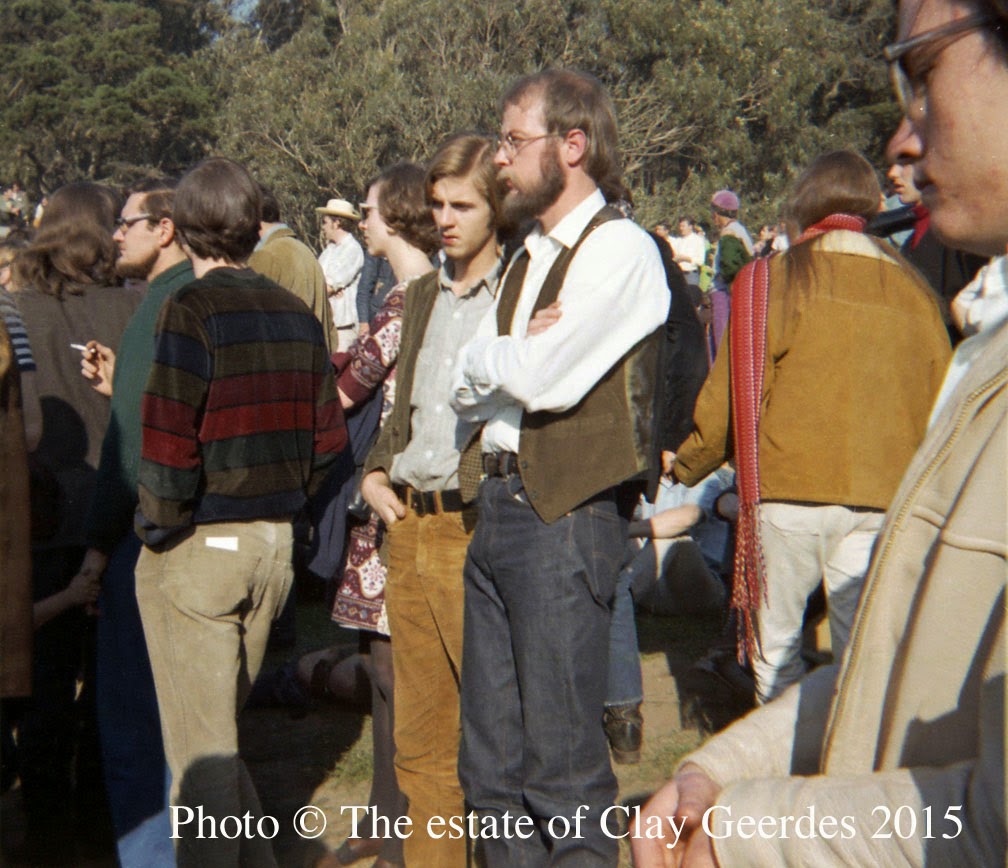 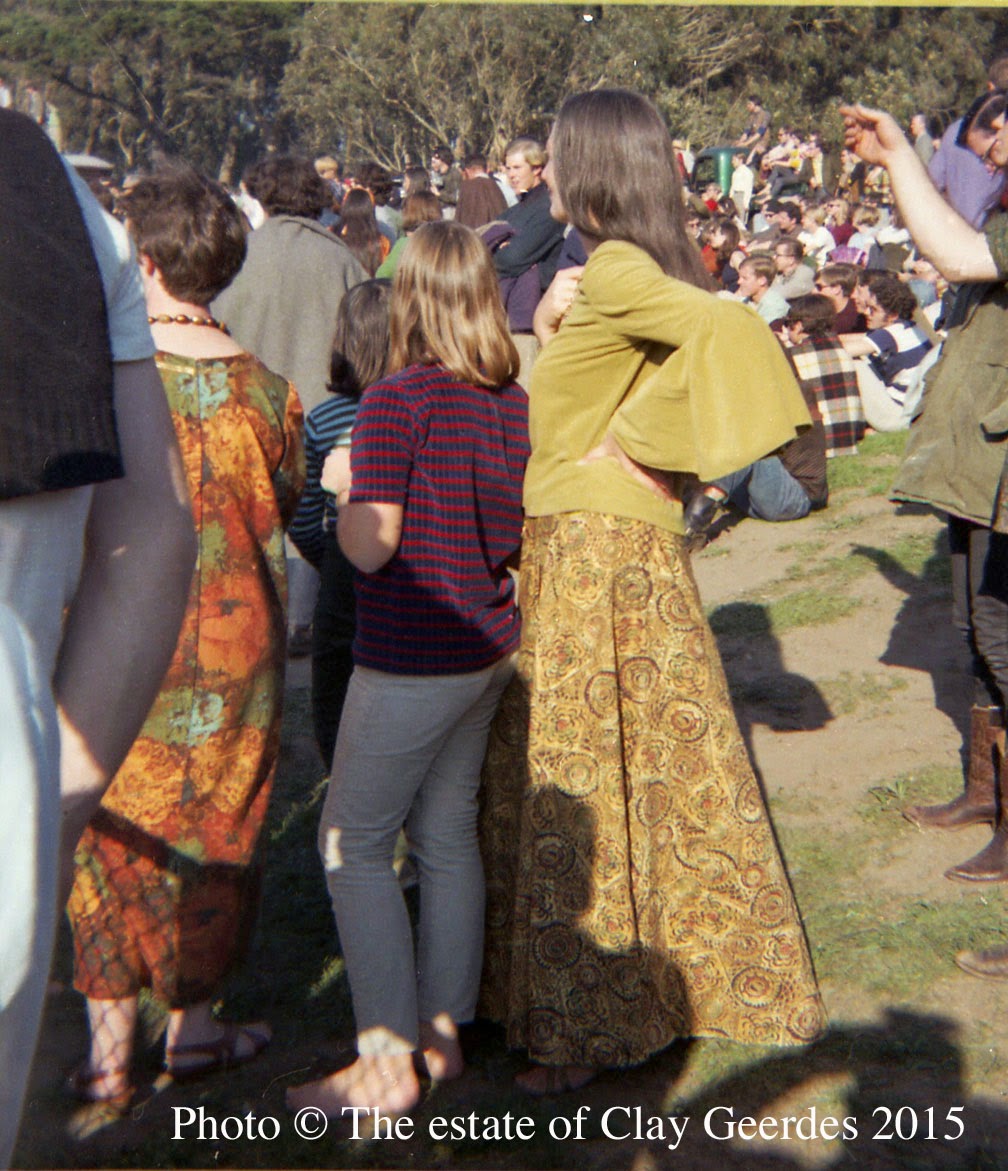 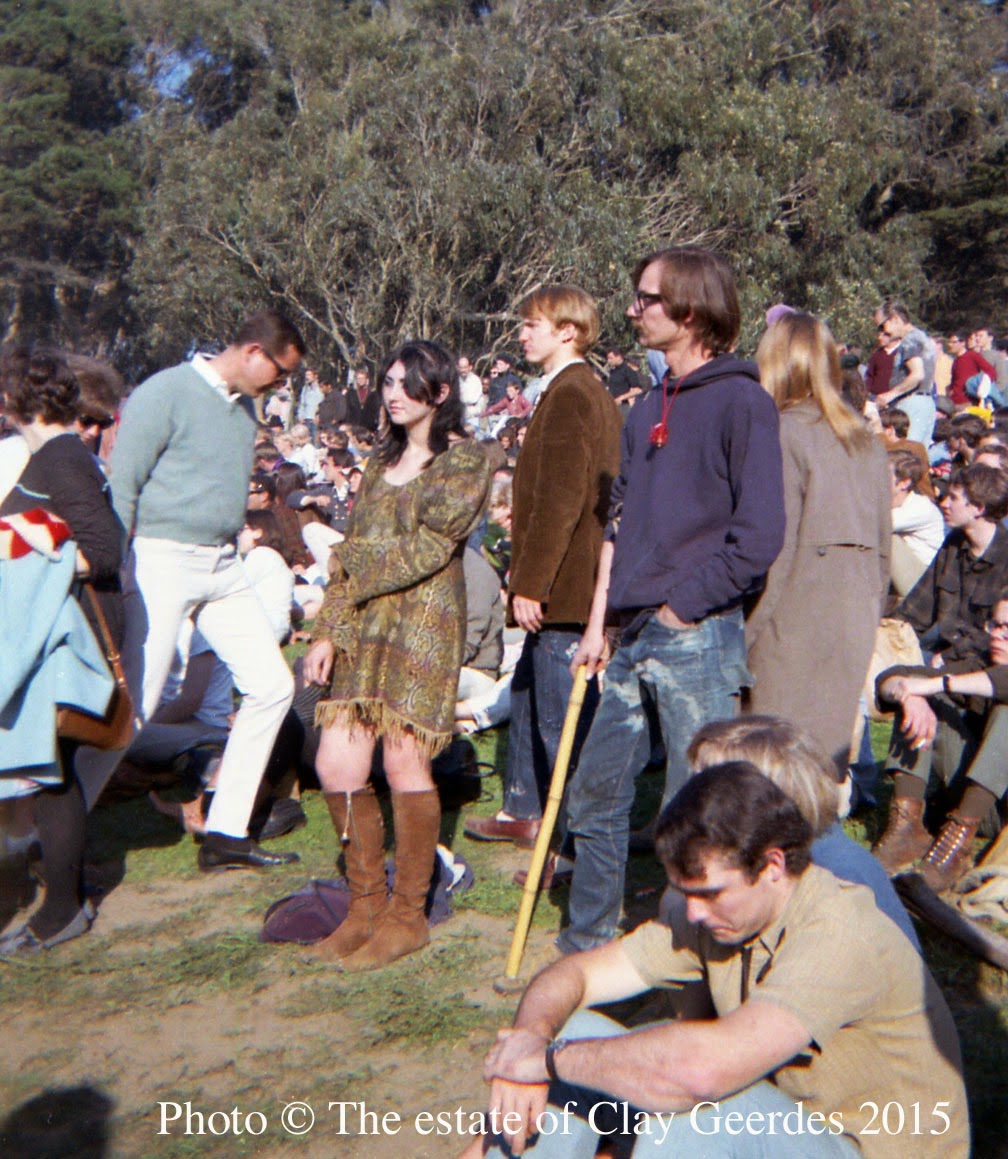 It was a day of poetry and music and general celebration, and the political people kept their lines to a minimum. When the music started people got up and danced and it was easily the biggest dance on earth to that point. It would be upstaged in 1968 by Woodstock, and in 1969 by Altamont, and I am sure the crowds would have continued to get larger and larger if certain promoters could have figured out a way to do it. There was a group trying for a Be-In at the Grand Canyon, and after People’s Park in April and May of 1969, there were people promoting Earth People's Park. I dunno. How many of you would like to go to a party to be attended by five billion people? 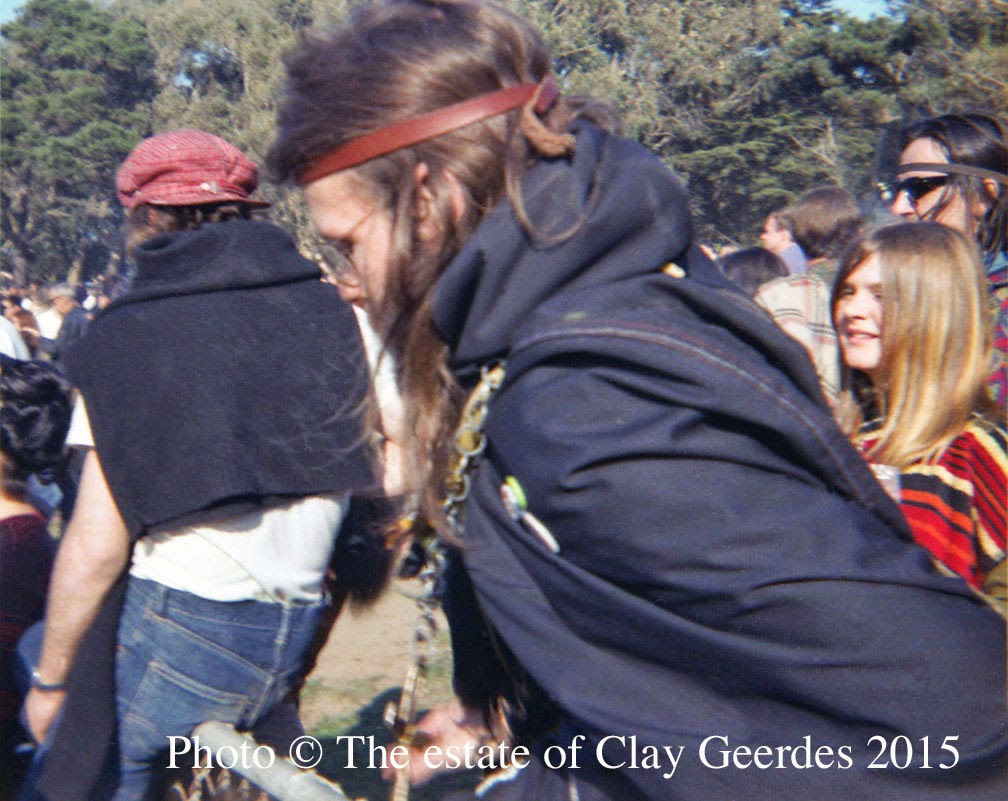