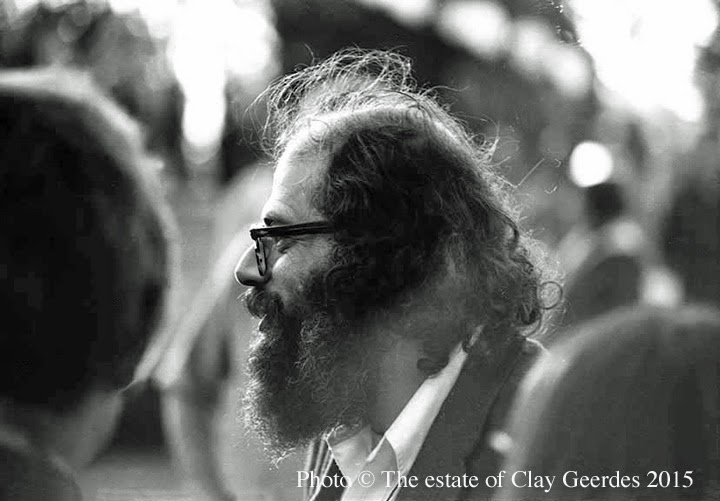 Clay Geerdes was born in 1934, in Sioux City, Iowa. He grew up in Lincoln, Nebraska, and joined the United States Navy in 1954, serving four years. After his stint in the Navy, he enrolled at San Francisco State College in California, where he received a BA in Literature in 1962 and an MA in English in 1963. He then attended the University of California in Berkeley, intending to gain a PhD, but he got sidetracked by the vigorous feeling of change and unrest that was in the air, and did not complete all of the necessary courses. 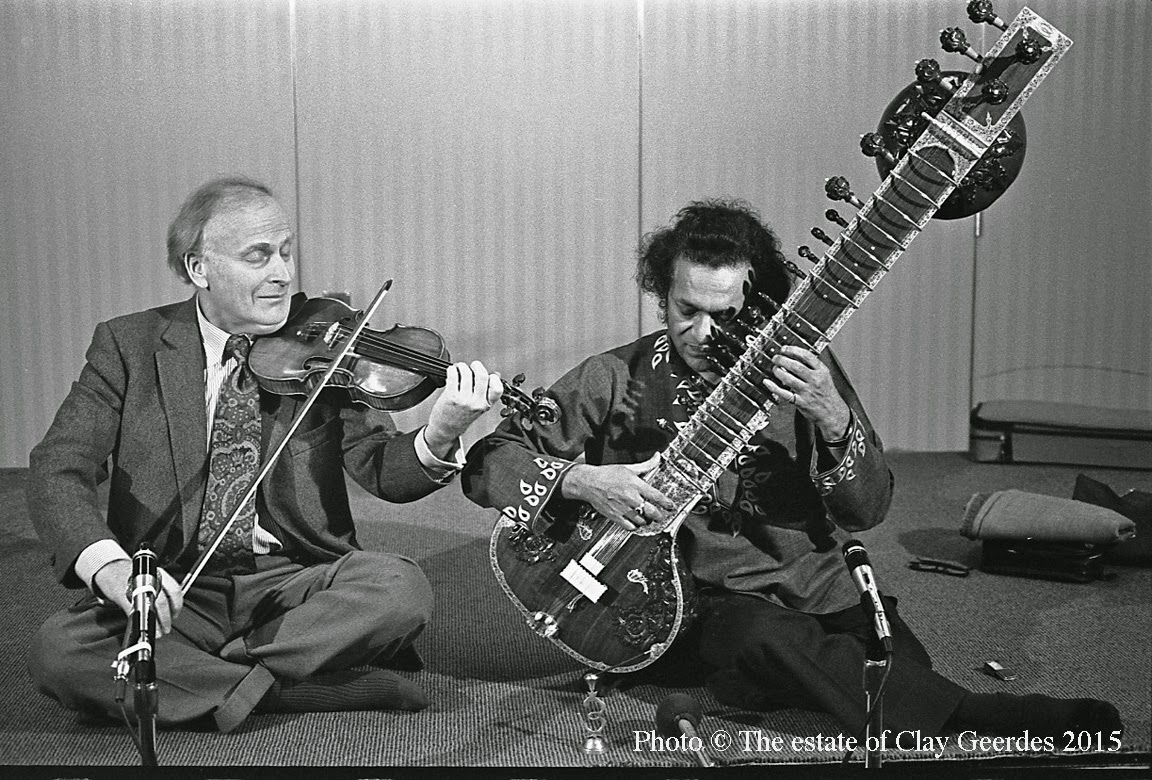 Clay Geerdes: I spent a lot more time listening to the political speeches on the steps of Sproul Hall than I did working on my dissertation on Thomas Hardy, and when the Free Speech Movement took off in October of 1964, my various graduate seminars seemed trivial and meaningless. I finished the dissertation and most of my course work, but I had lost interest. 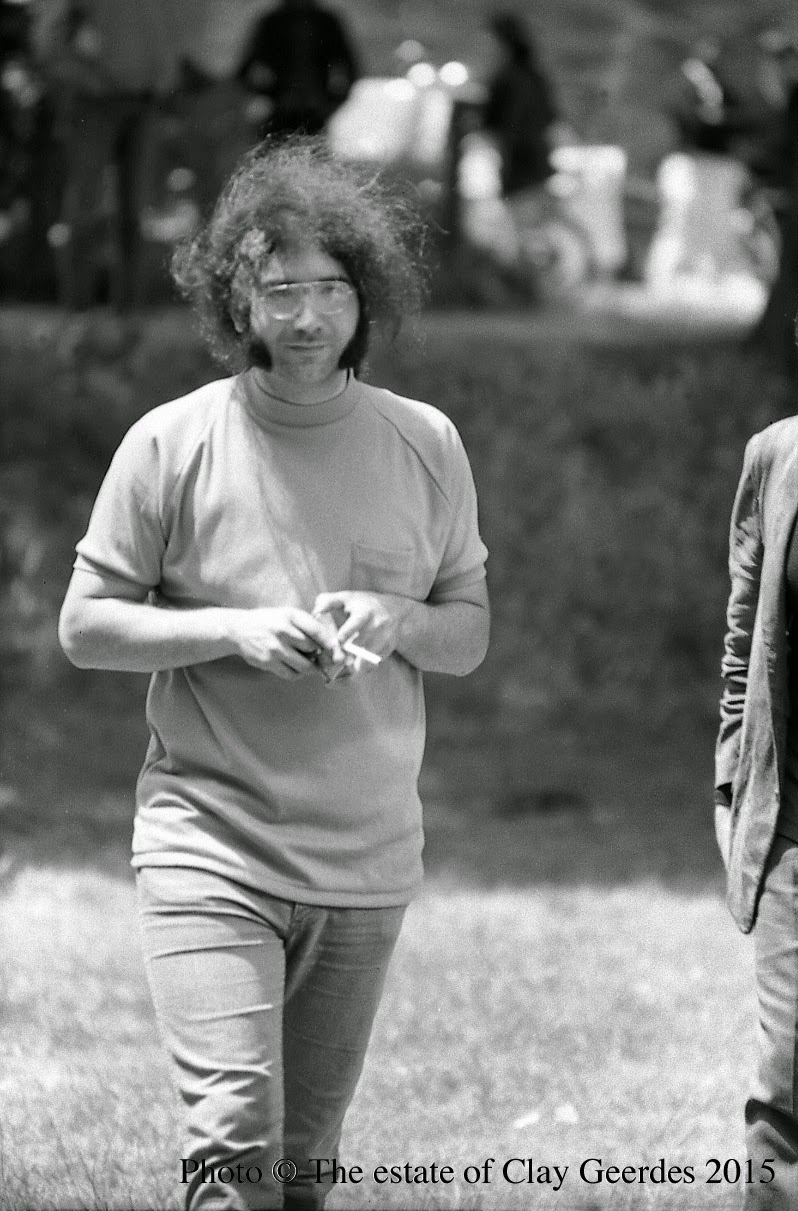 In 1965, Clay was hired as an instructor at Fresno State College, where he taught a course of standard English to incoming students. He remained there until 1968, when he moved to another school, Sonoma State College, staying there until 1970, after which he abandoned teaching and dedicated himself to the full-time pursuit of freelance journalism, actively seeking out stories and providing frequent articles (and, in some cases, also supplying photographs) for the Berkeley Barb, the Los Angeles Free Press, the Staff, and other publications. 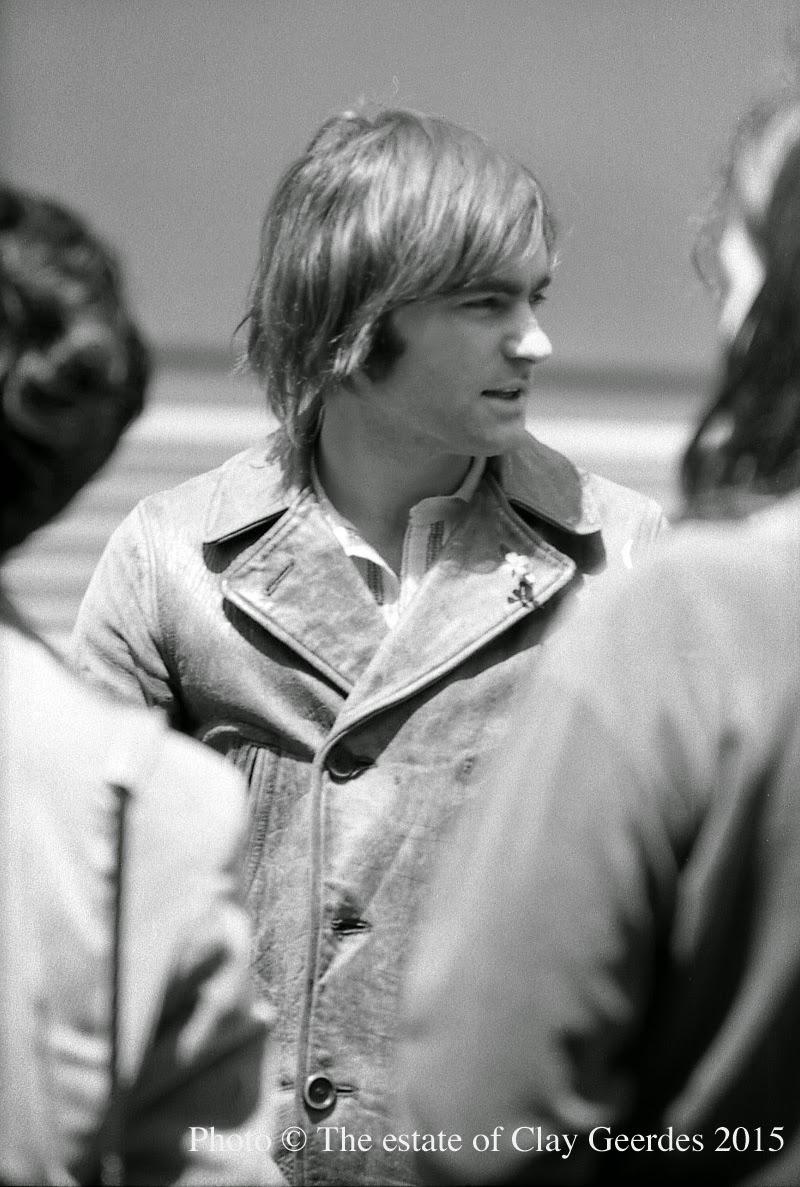 Clay Geerdes: So many scenes going all at once. I ran myself ragged in those days. I took several rolls of film a day and when I got back to the room late at night I souped the negs and hung them up, wrote my copy on the old portable Underwood that had gotten me through college, then picked out the shots I liked and printed them. I always had everything stamped and ready to mail the next morning. And I always chose my photos. I never sent in proof sheets and let the editors choose. I usually got to be friends with the people I wrote about and I wanted them to look good in the mags. My editors didn't know them and I couldn't trust their choices. In cases where I had to send proof sheets, I just blacked out pictures I didn't want to see printed and said they were out of focus. 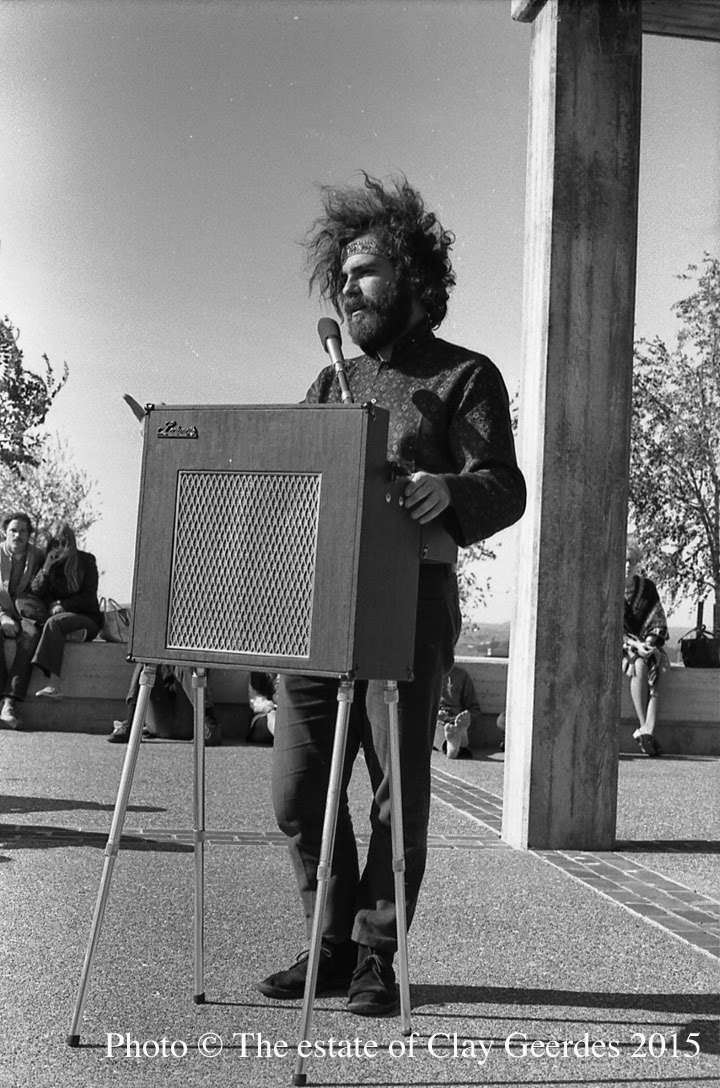 Clay began to take a deep interest in the new world of underground comics (more commonly known as "comix") in 1970, after a chance meeting with Roger Brand, an underground cartoonist who put Clay in touch with other like-minded cartoonists. As a result of Clay's interest in underground comics, combined with his desire to promote them to a wider audience, he began to write and publish his own monthly newsletter, Comix World, in October, 1973. Comix World continued until 1984, when it was succeeded by Comix Wave, which Clay had started in 1983. Clay also published the Comix World Mini-Series, inexpensive booklets that featured the work of unknown cartoonists whose work had been rejected elsewhere. 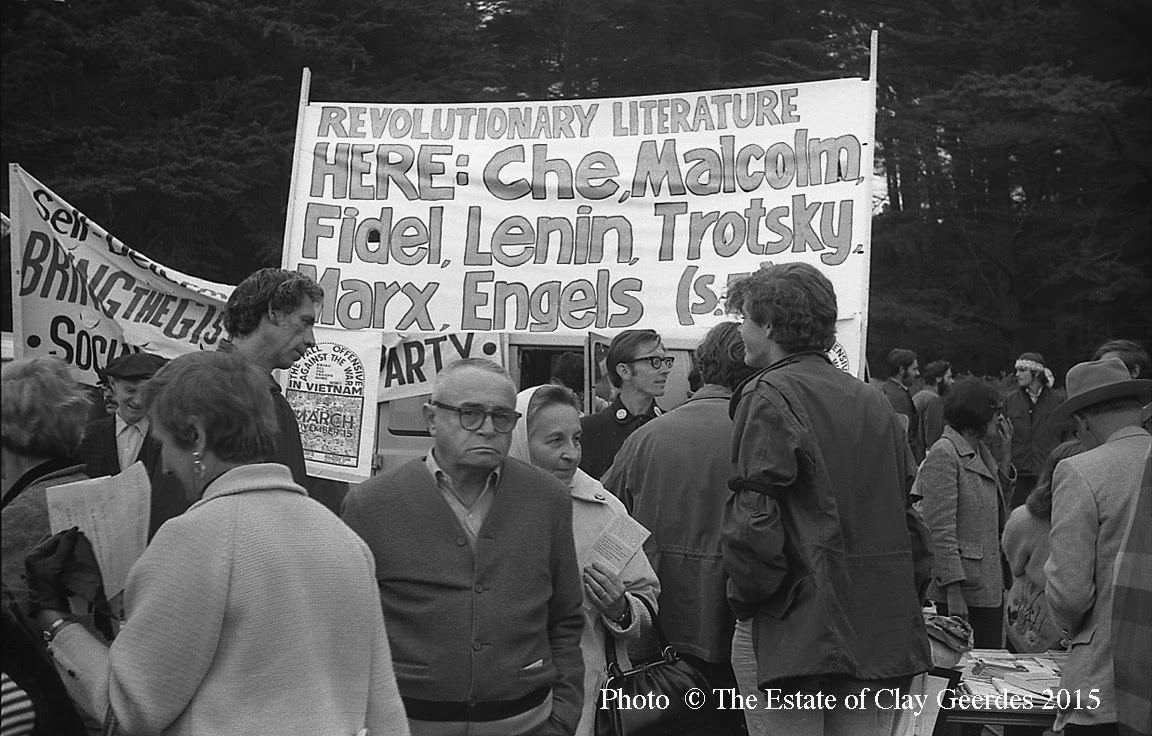 Clay Geerdes: I liked most of the comix. Not all of them. There were many I thought worthless and some I just didn't care about because they did not speak to me. Comics are a personal thing and one's degree of involvement is intricately related to the extent to which one sees his own fears and fantasies reflected in those little mirrors we call panels. Once I became involved with the underground comix scene, the cartoonists and publishers expected me to review all the books (favorably, of course) and write continual hype for the product. My early columns and newsletters reflect this biased attitude. While I avoided personal gossip, I was still thought of as a gossip by many. Some thought I was exploiting them! What a joke that was. I got little or nothing for all that purple prose. 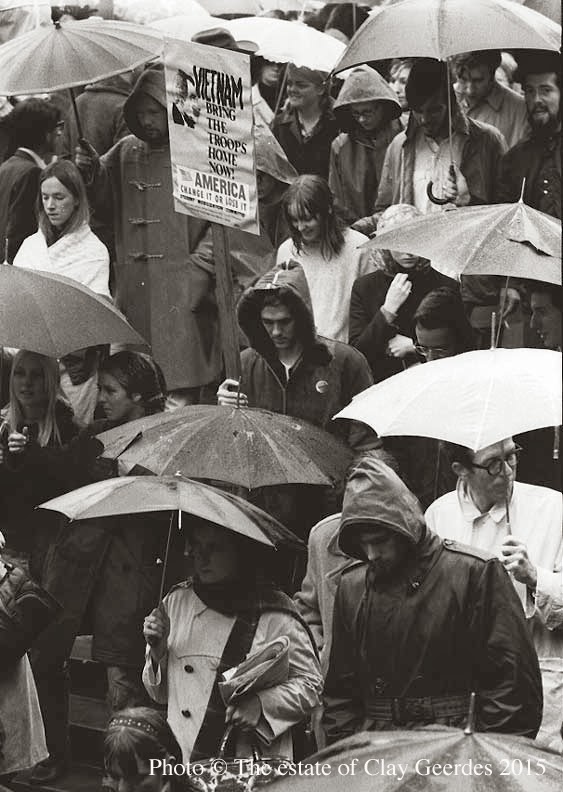 Antiwar protesters in the rain, Berkeley, 1967

In addition to Clay's articles and newsletters, he constantly took photographs, mostly in black-and-white, throughout the 1960s and 1970s, using his camera to record the different modes of living that were taking hold in the Bay Area, particularly in San Francisco and Berkeley. He had an enviable knack for putting himself in spots where interesting things were most likely to happen, and he caught many famous (and some briefly well-known) faces on film, including Allen Ginsberg, Timothy Leary, Ravi Shankar, Jerry Garcia, Joan Baez, Mario Savio, Bobby Seal, Wavy Gravy, Jerry Rubin, Michael McClure, Richard Brautigan, Robert Crumb, The Cockettes, and Divine. 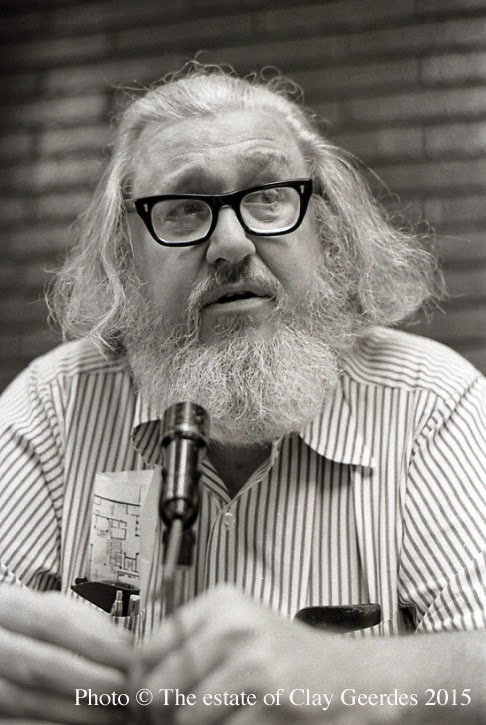 Clay Geerdes: I went through all the neighborhoods, stopped in boutiques, delis, novelty shops, and I talked to everyone. I left my card and when I saw something unusual I suggested we do a photo and small item. It was all promo and I saved my serious stuff for the Free Press or the Barb. 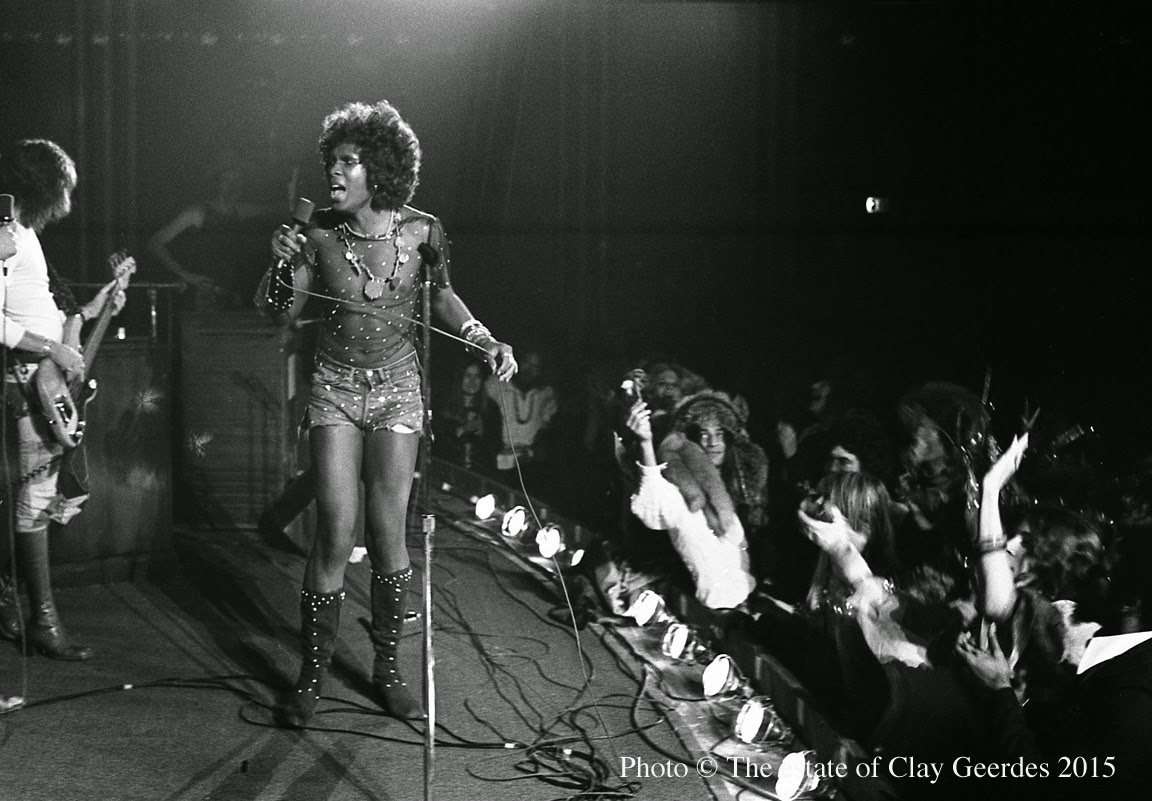 Unfortunately, Clay Geerdes is no longer with us. He departed from this world in 1997, at the age of sixty-three, leaving behind a wealth of photographs and writings that amply testify to both his sharp eye and his keen insight. David Miller, who was a close friend of Clay Geerdes for many years (and who is, himself, a cartoonist and photographer), is now the primary caretaker of Clay's archives, and also serves as Assistant Editor of this website. With The Clay Geerdes Archives, it is our earnest intention to display Clay's work to its best advantage, in the hope that it might be acknowledged and enjoyed by the general public. 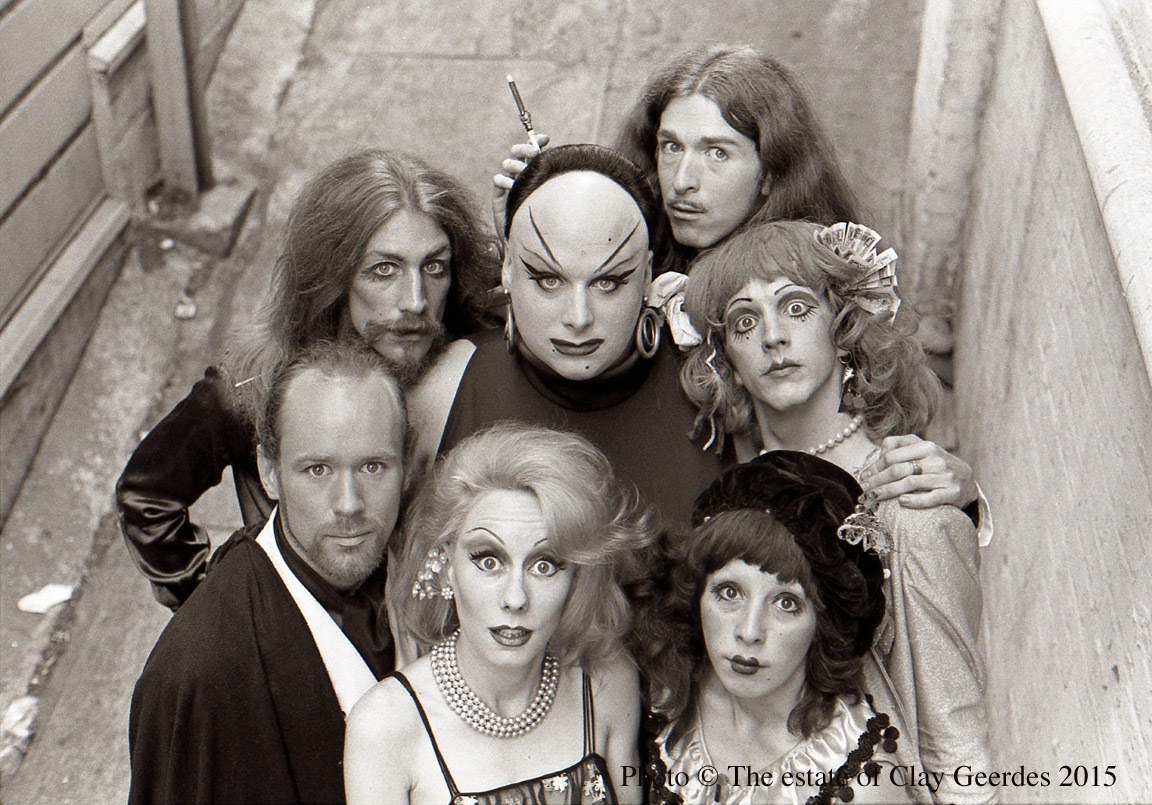 Divine with The Cockettes, 1973