Clay Geerdes and David Miller: Memories of a Friendship 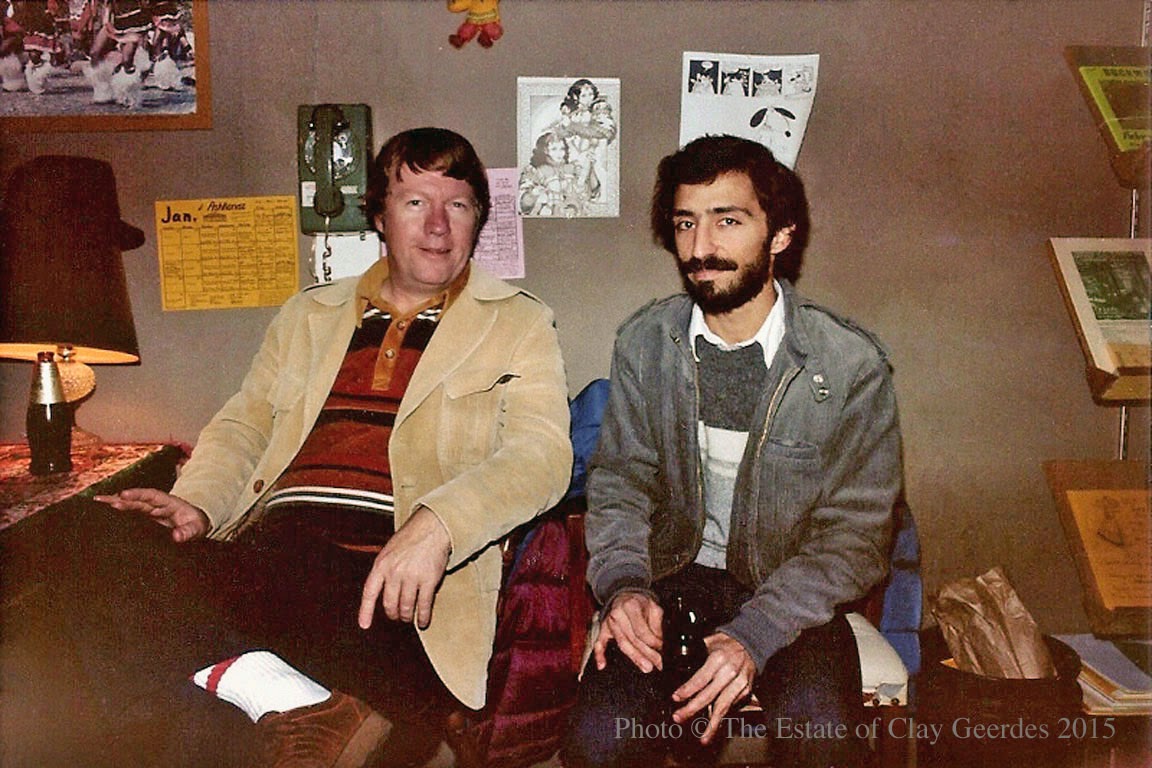 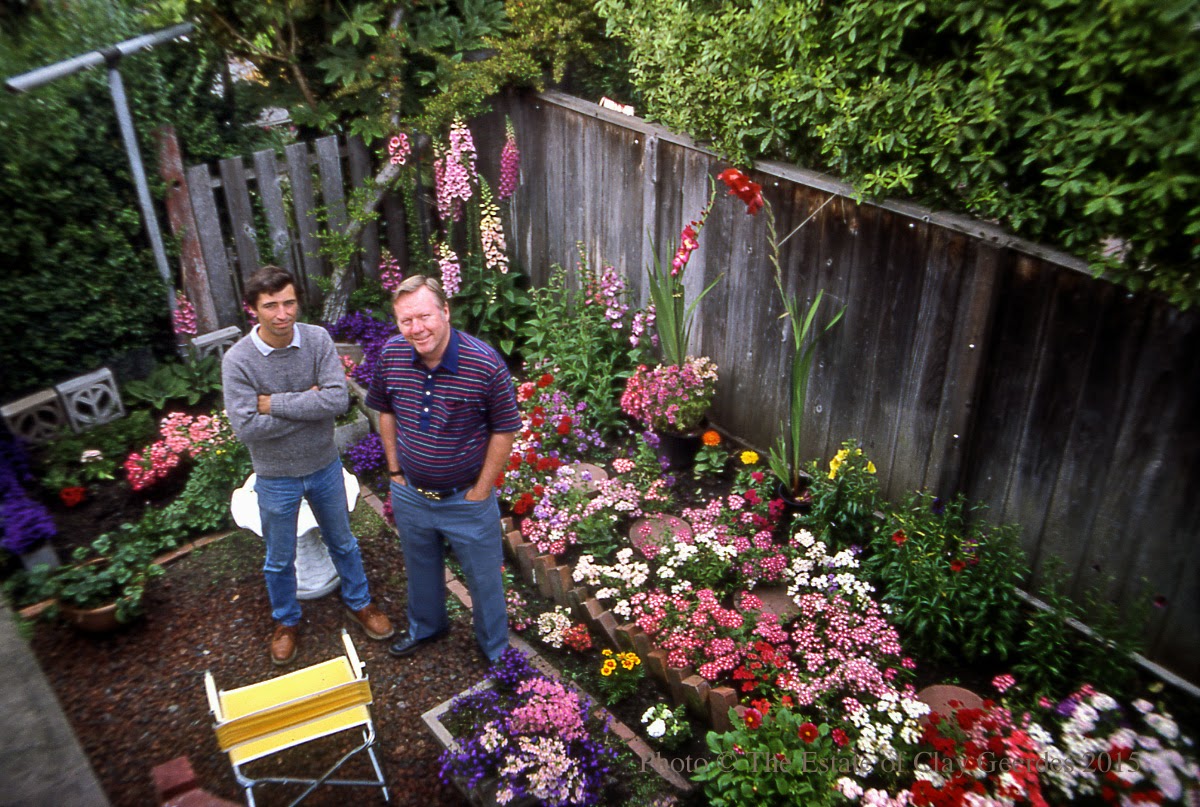 David Miller, Assistant Editor/Photo Editor of The Clay Geerdes Archives and caretaker of Clay's photos and writings, maintained a friendship with Clay over a period of seventeen years. Here are his memories of that friendship.

David Miller: I got involved with small press and alternative, self-published comix by joining a group called the Cosmic Brain Trust, in Oakland, California, in the middle of the 1970s. It was founded by Rey King, a young African-American with high ideals of bringing talented people together to join forces and create an ongoing publication, Cosmic Circus, devoted to art, enlightenment, drugs, Jimi Hendrix, and sex. He published a few comics and a floppy disc recording. They were too expensive to publish with a profitable return, and eventually the project folded. It was my first experience with self-published art. 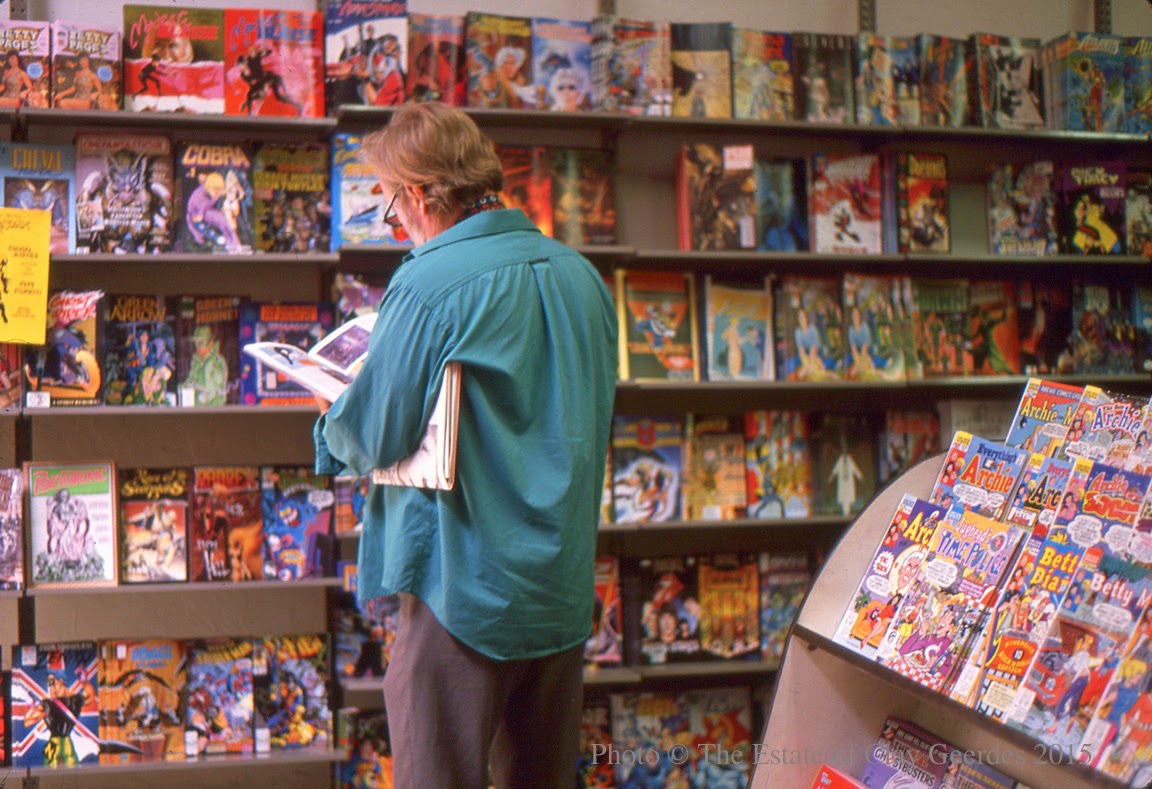 Clay at Comics and Comix, Berkeley, 1990

I soon became aware of Clay Geerdes through his newsletter, Comix World. I picked it up for free at Comics and Comix, the comic book store on Telegraph Avenue in Berkeley. It was a two-sided, xeroxed sheet with news of comix, artists of interest, and a general review of what was happening in the media world. I loved to read it as I sat in coffee shops drinking cappuccino. 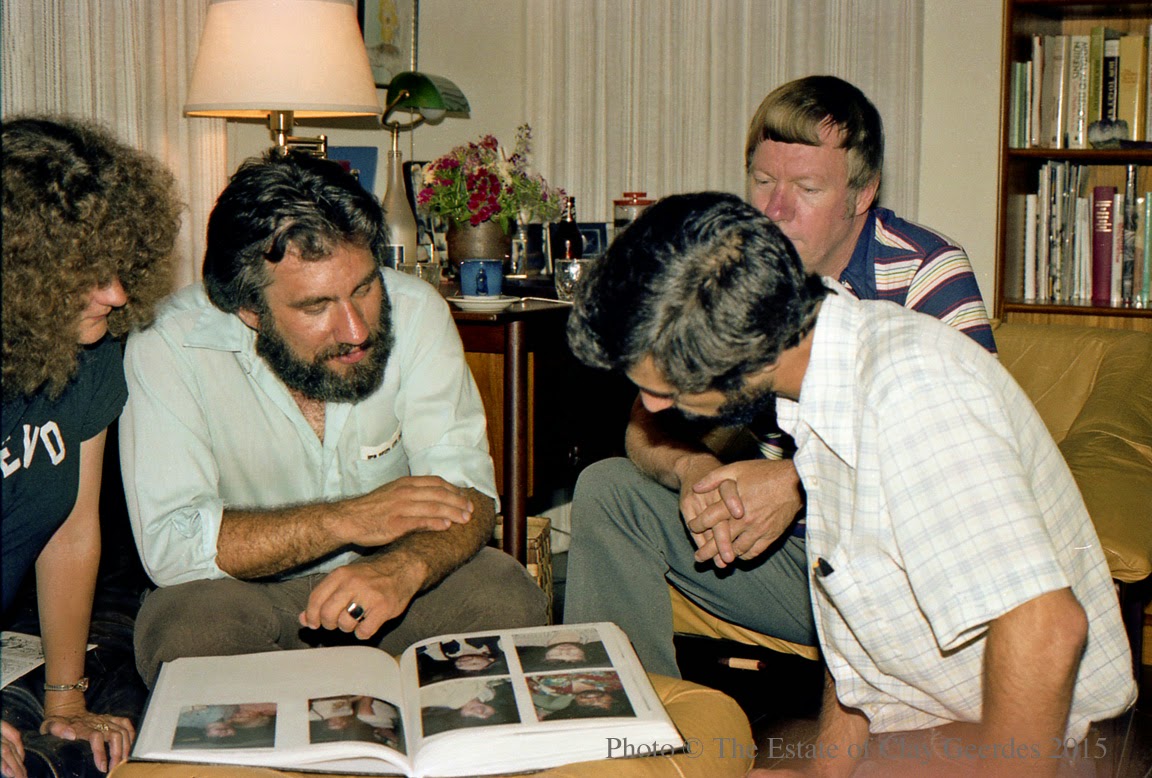 Sally Holman and Par Holman (cartoonist), with David and Clay,
looking at a collection of Clay's photographs, 1982 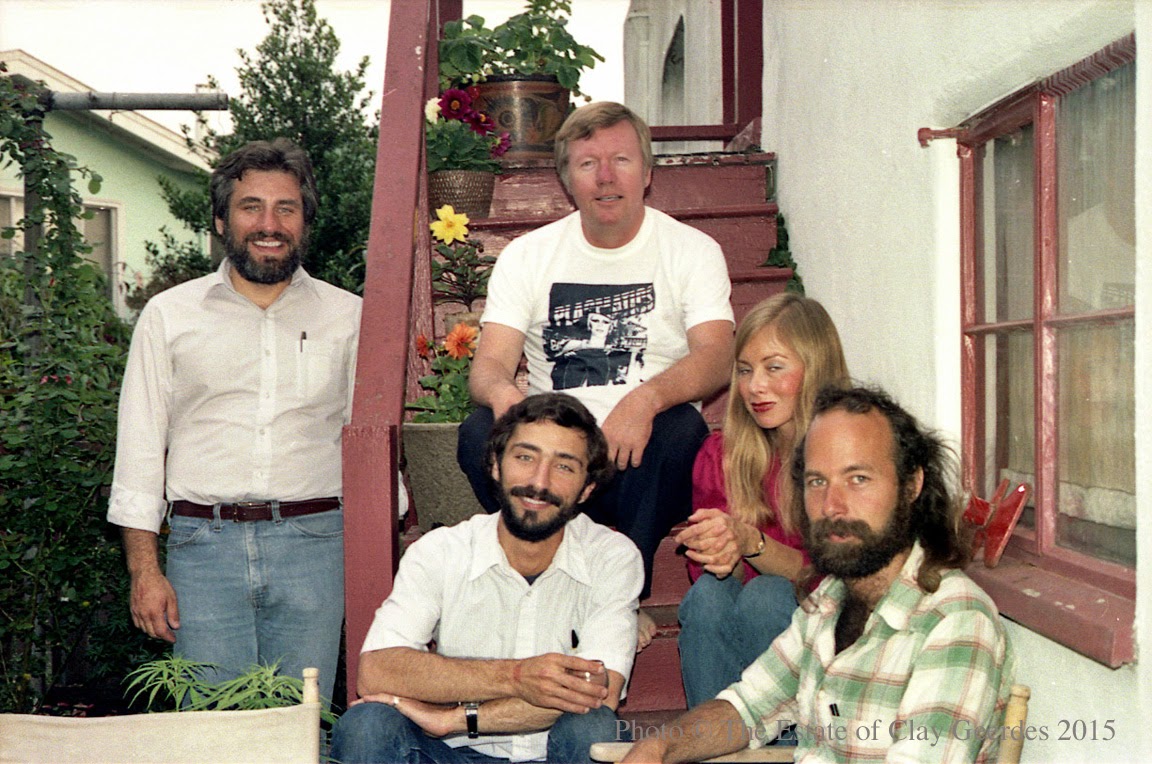 In July, 1980, I read about a comic book swap at the Finnish Hall in Berkeley. I happened to have the day off and made the thirty minute drive in hopes of finding some underground comix or other alternative publications. As it turned out, all I saw were guys with boxes of superhero comics. I was very disappointed. Then I saw an older guy with a box of UGs and other items that were obviously not the regular spandex superheroes. He had a stack of Comix World newsletters, which I immediately recognized. I asked him if he was Clay Geerdes and he said that he was. I told him how much I enjoyed reading his newsletter, and he gave me some free copies. Next to him was Joel Beck, one of the underground comix artists that I had recently discovered. Clay encouraged me to buy one Joel's comics and have him sign it. I still have it today. 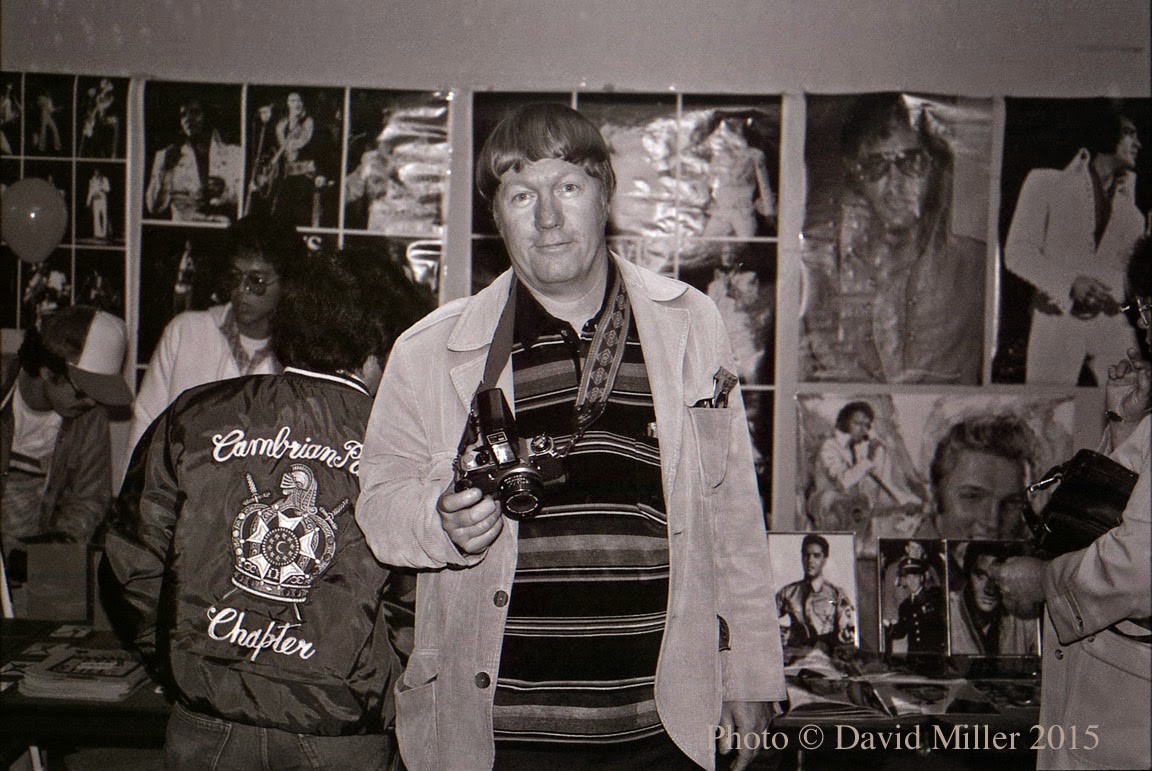 Then I saw a shoebox with some little xeroxed comics. I was interested in them and Clay sold me a few. He may have given them to me, I don't remember. He asked me if I was a cartoonist. I said that I was, and he encouraged me to contribute to the mini-comix that he was printing and selling himself. 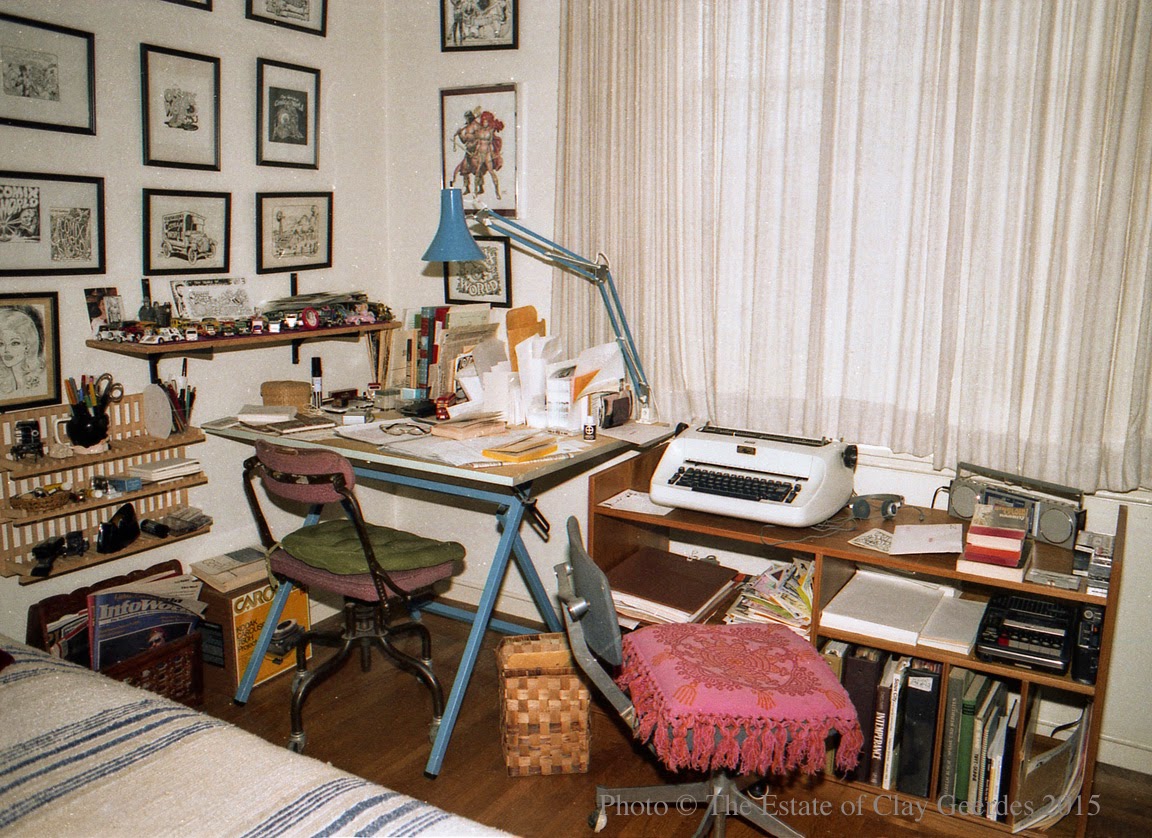 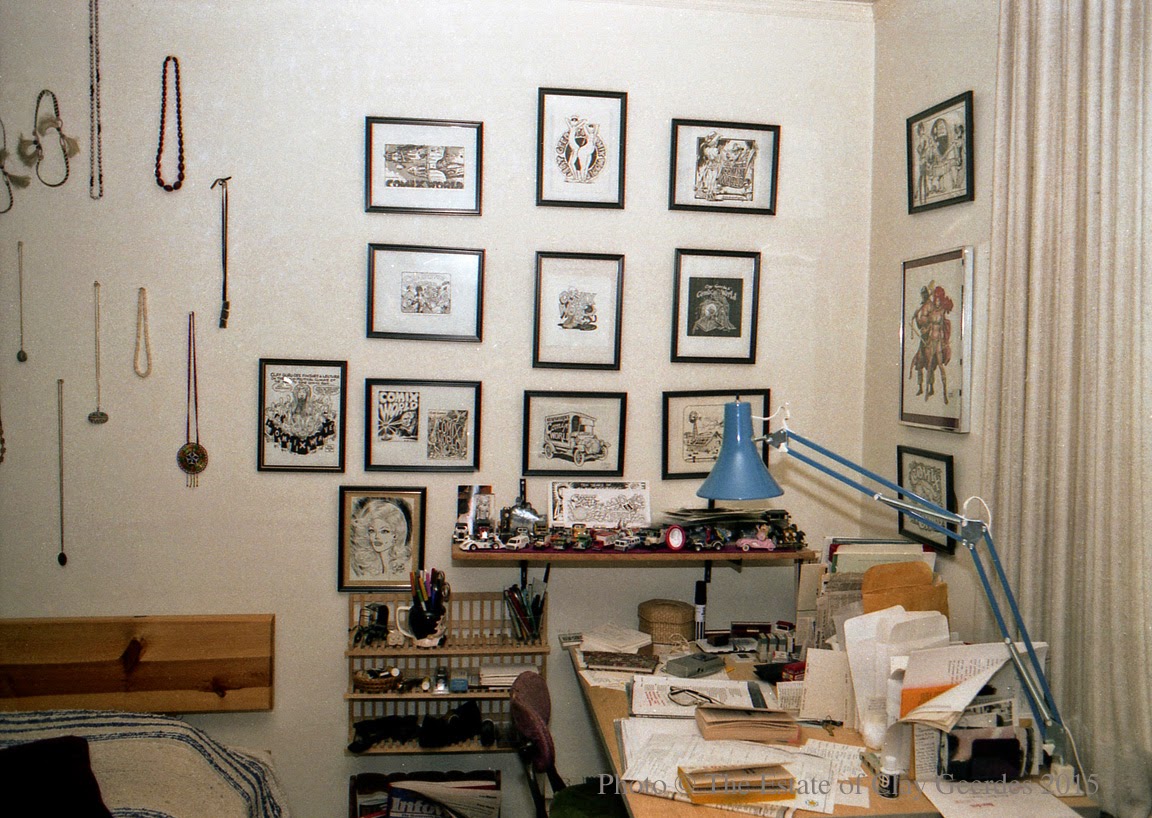 Up until that moment, I had never met a single person who really cared about me as a cartoonist. Clay not only took an immediate interest, but he promised to publish my comics and pushed me to draw more. In fact, he almost twisted my arm for more comics. He told me many times how much he loved my cartoons and that he had shared them with friends. We exchanged a few letters and soon I began visiting him in Berkeley. We would hang out on Telegraph Avenue, going to the comic book shops, have lunch and talk for hours. Clay did most of the talking. 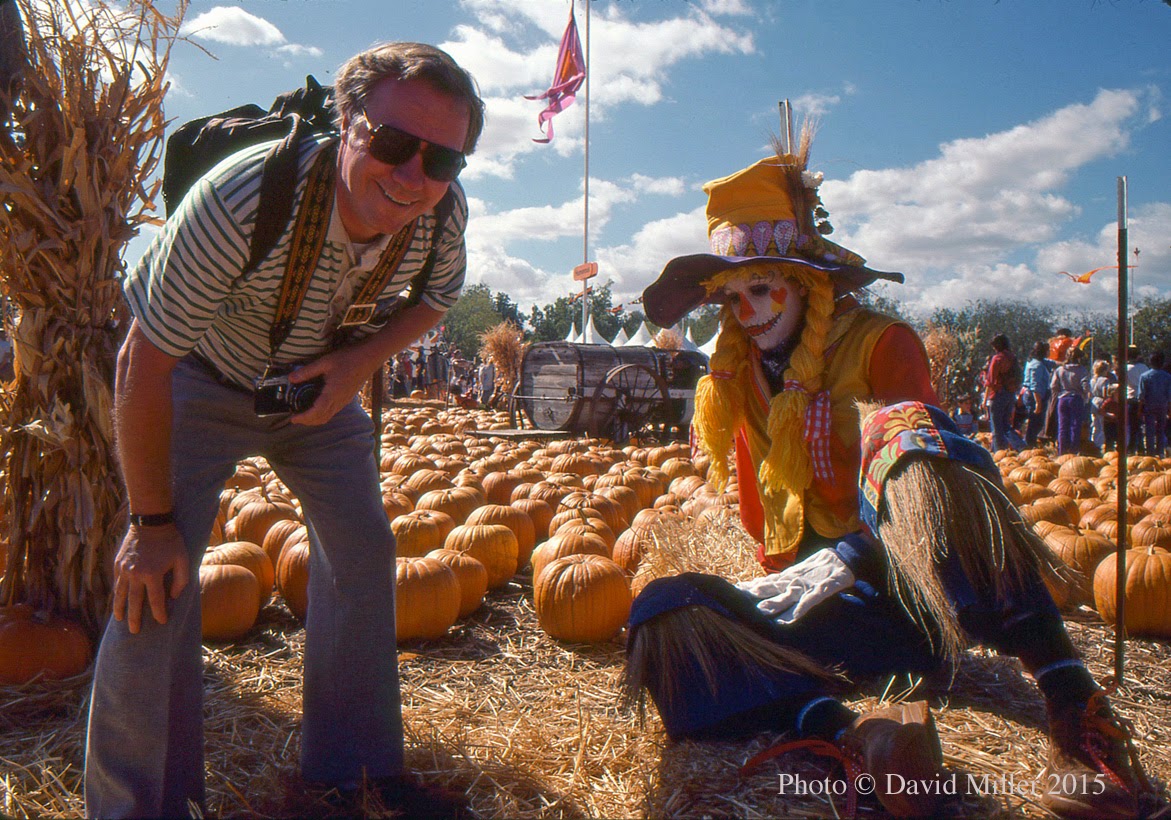 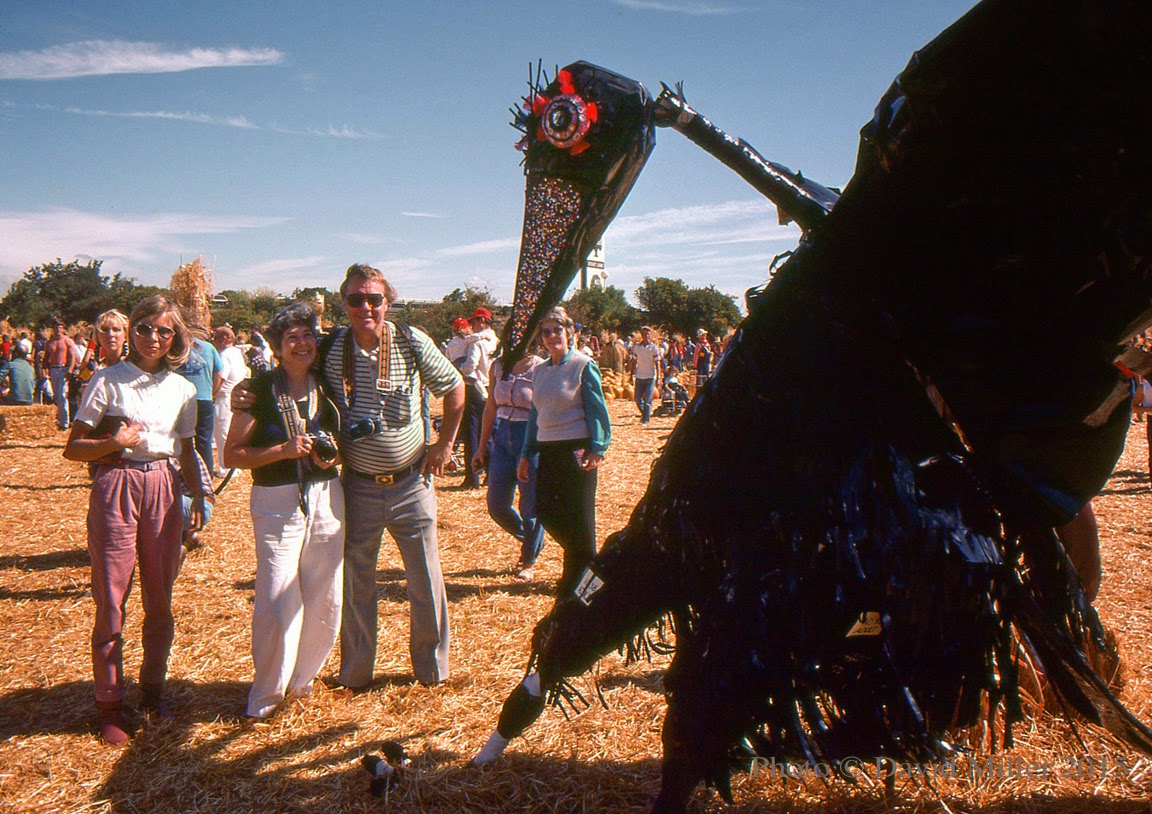 At that time, Clay still had the weird bangs and spoke in hip jargon, using "Baby!" and "Man!" in every sentence. He talked about underground artists on a personal level. He not only knew many of them, but had helped to further their careers and personal lives. I was very impressed, and felt that Clay was a teacher and mentor. 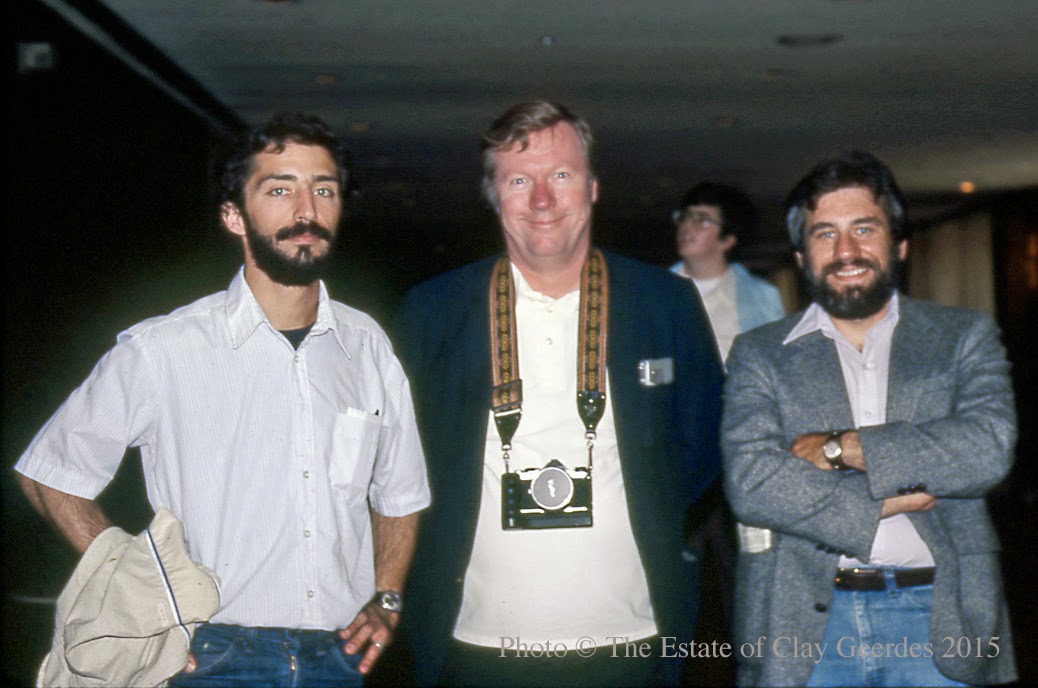 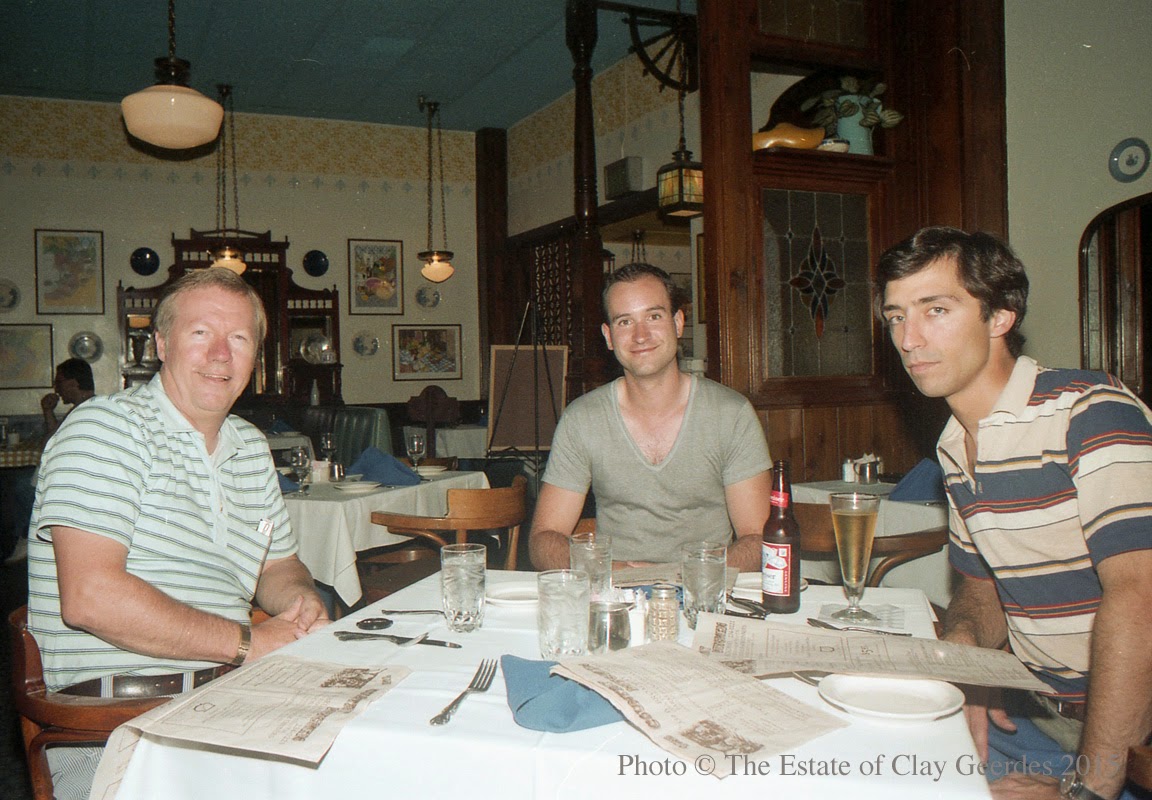 Clay took me to all the comic book conventions in San Francisco and San Jose, and even to the big one in San Diego. There used to be many of them, and they were frequented by many underground artists, writers, publishers, and performers. I was amazed that Clay seemed to know them all personally. He would stop at an artist's booth and launch into a conversation, snap a photo, and move on to the next. I followed Clay around so much that I began to think of myself as his shadow. 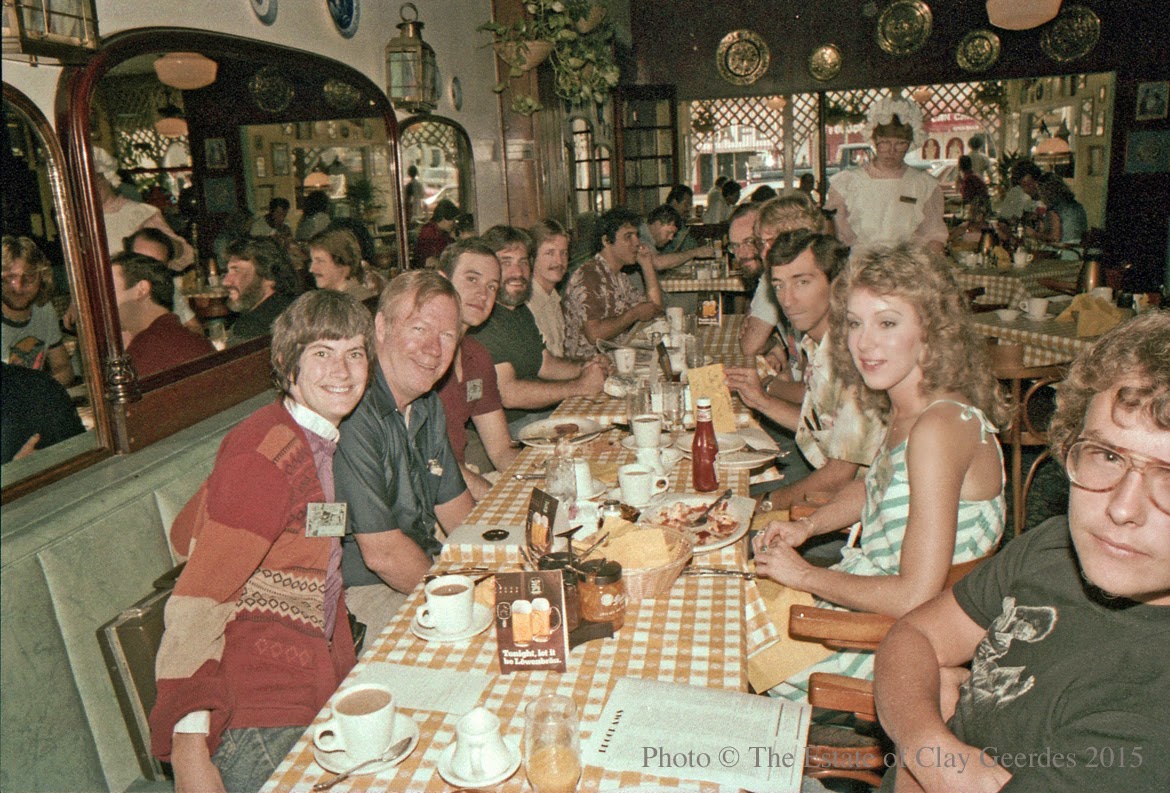 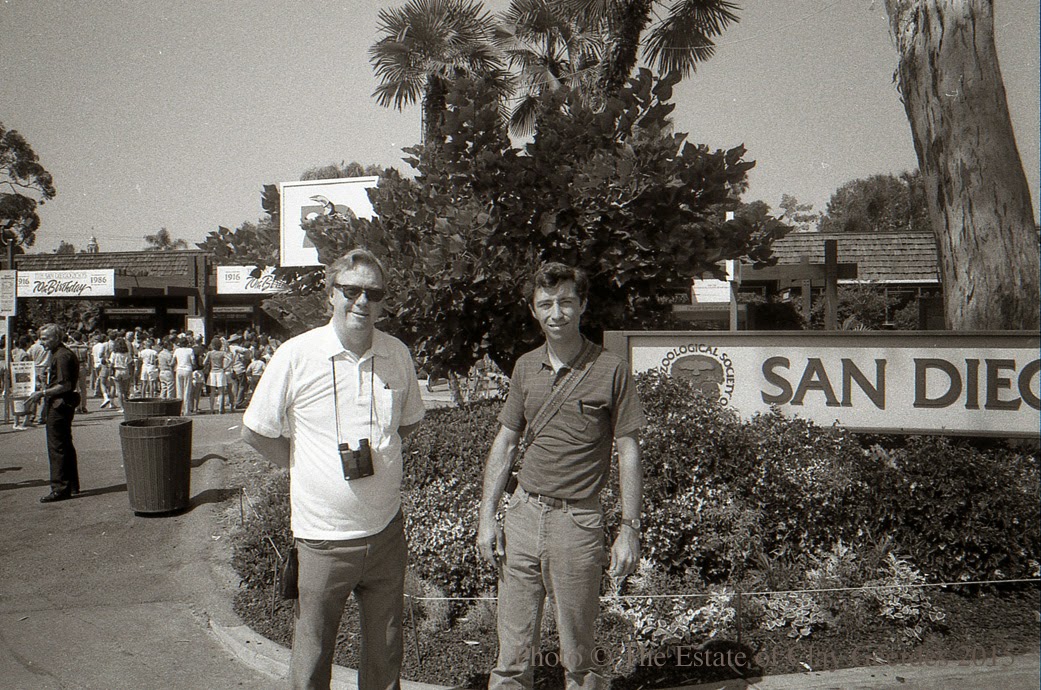 I continued to visit Clay and hang out with him on Telegraph Avenue, but I also visited him at the folk club, Ashkenaz, on San Pablo Avenue in Berkeley. He worked there, collecting cash from people as they entered and doing various other chores. The walls of Ashkenaz were decorated with protest posters collected by the owner, David Nadel, and many beautiful photographs of musicians who had performed there. The photos were taken by Clay, and included Cajun performers Clifton Chenier and Queen Ida, blues great John Lee Hooker, and others. Ashkenaz was a club with live music, and the atmosphere was friendly and filled with people of all ages and backgrounds, who came to the club to dance. I sat at the desk with Clay, watching the dancers and listening to the wonderful music, as often as I could for many years. 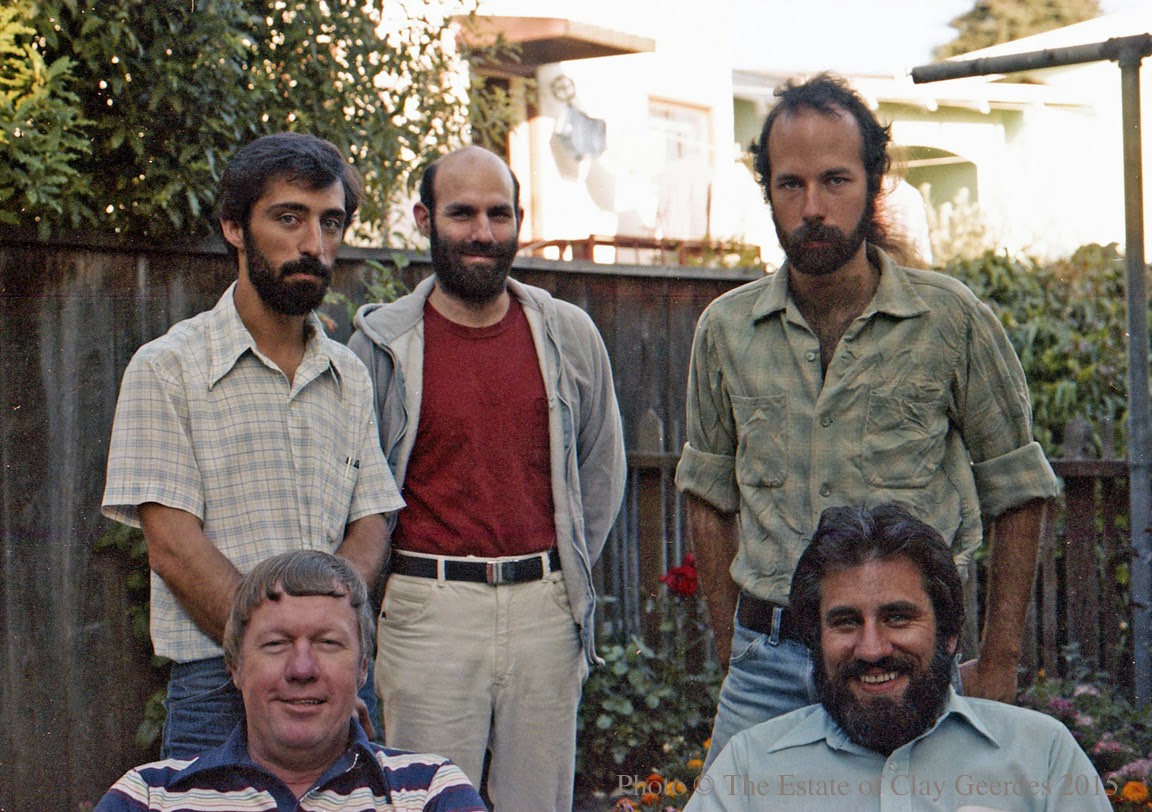 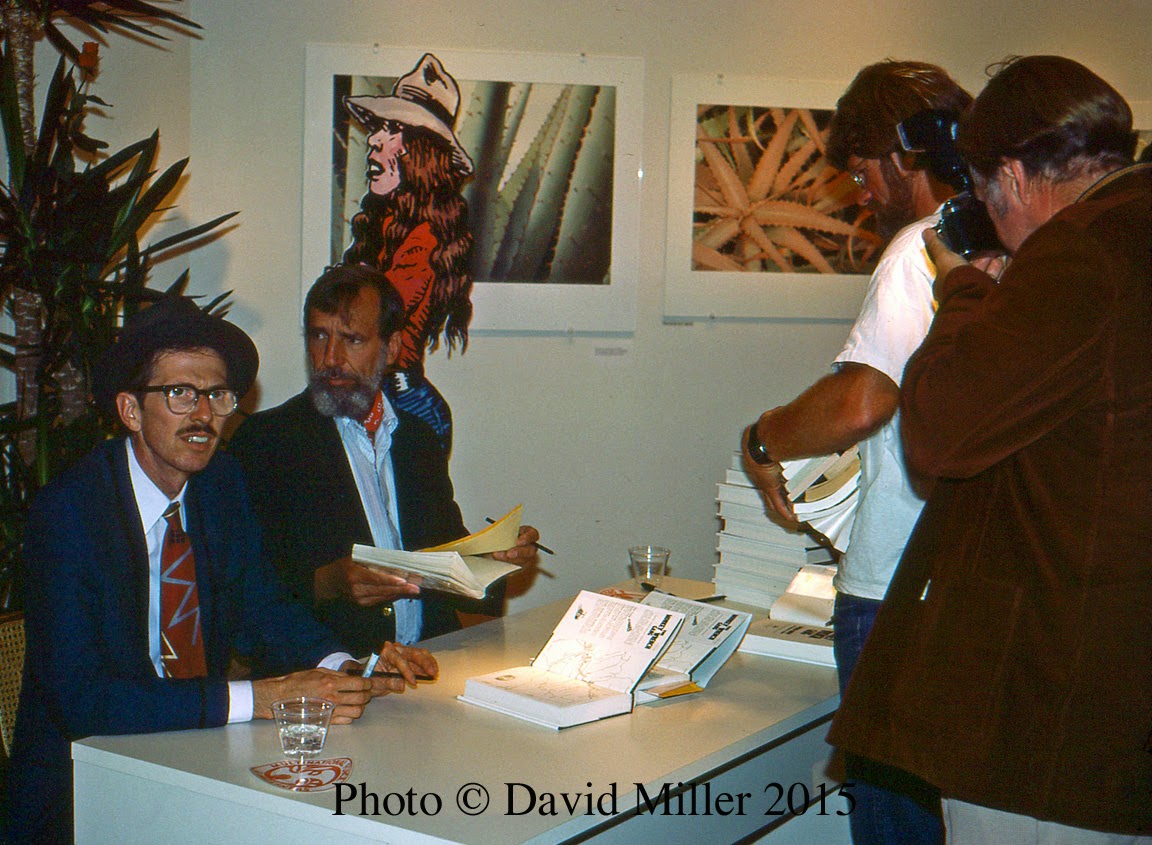 Robert Crumb and Edward Abbey, signing the 10th anniversary edition of The Monkey Wrench Gang and being photographed by Clay Geerdes, The Nature Company, Berkeley, 1985

In 1982, Clay introduced me to his neighbor, Karen Jambeck, so I could see her art. She later became my wife. I moved in with her, and from that point on I was a next-door neighbor to Clay and his partner, Clara Felix. Clay and I became even closer friends, sharing interests in photography, comics, media, and even gardening. 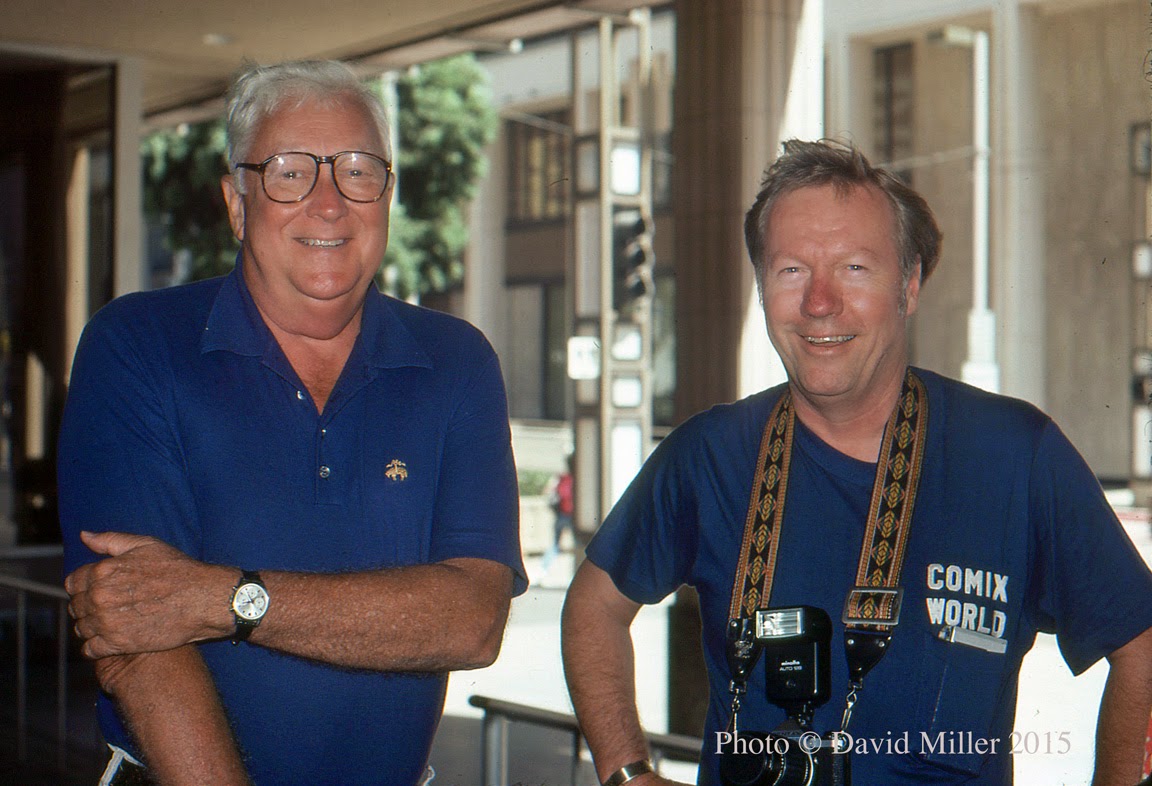 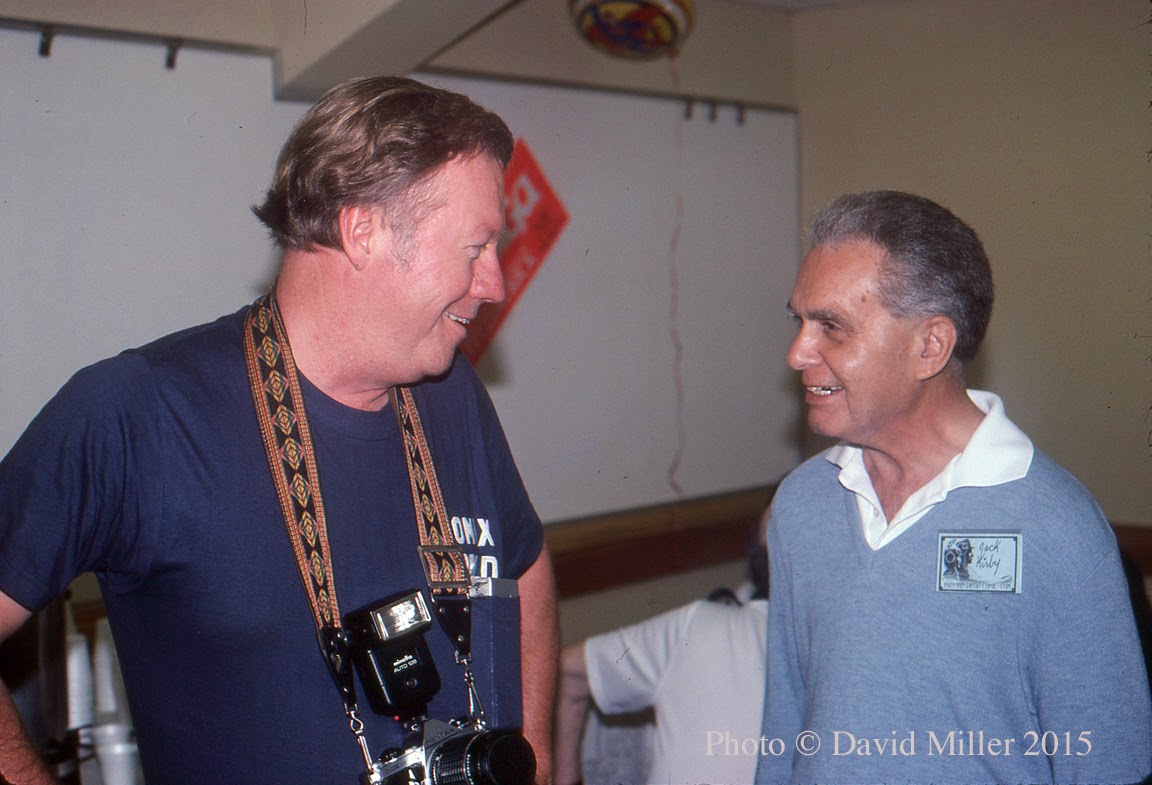 Our relationship continued until July, 1997, when Clay died of liver cancer. My wife and I were at his bedside shortly before he died. The extent of Clay's influence and inspiration in my life are impossible to measure. My life would be very different, and probably much less interesting, if not for him. 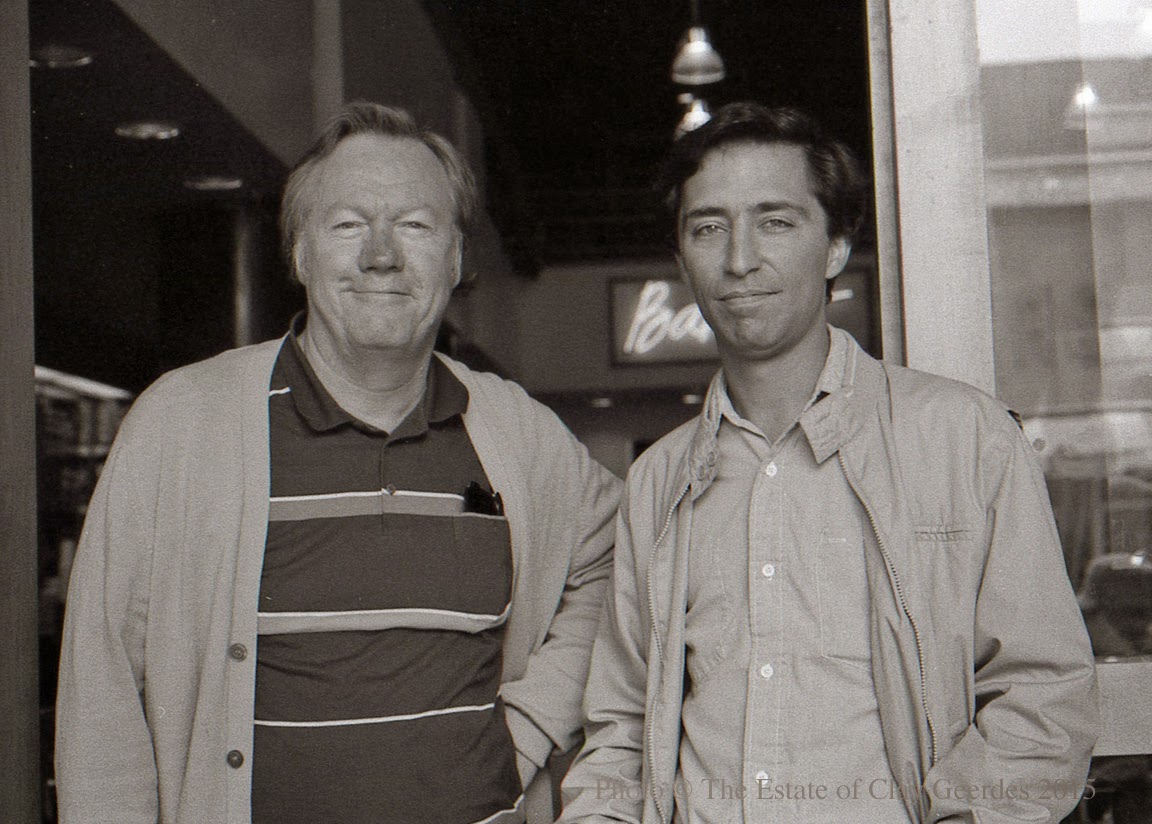